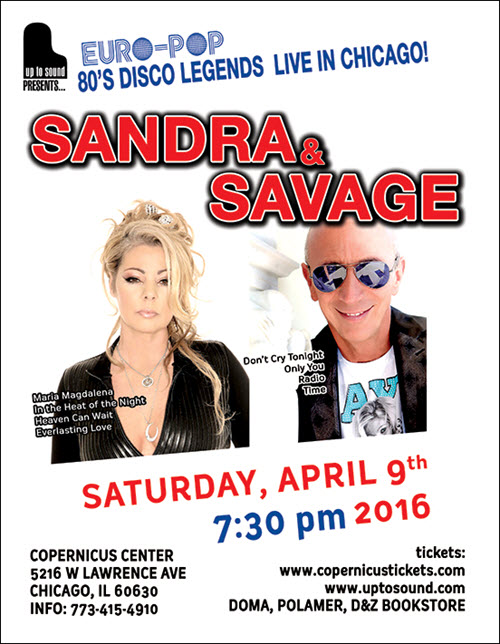 Sandra & Savage, both known for their golden and platinum records of Euro-Pop music from the 80s, Sandra, with hits:

They will make history by coming to Chicago, for the first time together.

Sandra Ann Lauer, commonly known under her stage name Sandra is a German pop singer, who enjoyed a mainstream popularity in the 1980s and early 1990s with a string of European hit singles: “(I’ll Never Be) Maria Magdalena”, “In the Heat of the Night”, “Everlasting Love”, “Secret Land”, “Hiroshima”, “Don’t Be Aggressive”, “Heaven Can Wait”, and many more. The popularity of many songs, which topped the charts worldwide, gained Sandra international success. “In the Heat of the Night”, earned her second place at the Tokyo Music Festival in 1986, and her albums “Into a Secret Land” and “Close to Seven” have won high critical acclaim. During the height of her popularity, Sandra even managed to outsell Madonna in a number of countries around the world.

Prior to embarking on a solo career, Sandra was the lead singer of an all-female disco trio Arabesque, which had a massive following in Japan and Russia. Also, between 1990 and 2001, she provided vocals on album releases of the very successful group Enigma, which had top 10 hits in North America and United Kingdom.

With sales in excess of 30 million records worldwide, Sandra has established her position as the most successful German disco/pop female vocalist. A cult star with a devoted fan base, Sandra remains one of the most popular singers of the 1980s in Continental Europe.

A man with the passion for music, started his solo career in December 1983, after he recorded and produced a dance single “Don’t cry tonight”, which was very successful across Europe and has been frequently remixed since. The same year, he recorded “Only You”, a slow disco number which became significantly popular as well. His first album, “Tonight” was very successful commercially and preceded singles like “Radio”, “Time”, “A Love Again”, “Celebrate”, and “Love Is Death”, followed by “I’m loosing you”, “Goodbye”, “I just died in your arms”, and “Strangelove”.

Thanks to the catchy melodies of his songs and timbre of his voice, Savage became one of the most appreciated singers in Europe (during his shows girls threw themselves at him), and one of the creators of the Italo disco genre, performing shows throughout Europe: in Spain, France, Germany, Switzerland, Austria, Belgium, The Netherlands, Greece, Portugal, Yugoslavia, Sweden and Italy. He also performed in the United States, Brazil, and Japan. In China a special version of the album “Tonight” was released, sung by a local rock star, while a famous French actress recorded a version of “Only you”, called “Dans mes yeux”. Amongst his most important shows were those in Katowice (Poland), with an audience of thirty thousand people and Larawan, Russia where seventy thousand people rushed to see him over four days. Between 2005 and 2010 Savage took part at three Autoradio Festivals in Moscow, a TV show filmed live at the Olympic Stadium in front of more than twenty thousand fans.