Karski & The Lords of Humanity is a partially animated documentary film about Jan Karski, who risked his life to try to prevent the Holocaust.

Karski & The Lords of Humanity Movie

PG-13: Parents Strongly Cautioned, some material may be inappropriate for children under 13 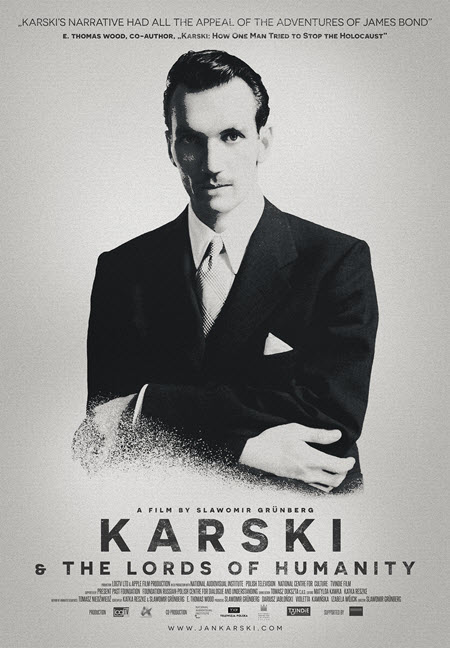 Jan Karski, risked his life to try to prevent the Holocaust. Using a groundbreaking technique that combines unique archival footage with animated sequences, Emmy-winning filmmaker Slawomir Grünberg, re-creates the death-defying mission of Jan Karski, the Polish underground courier who travelled across occupied Europe, infiltrating the Warsaw Ghetto and a Nazi transit camp to deliver eyewitness accounts of the unfolding Holocaust to the Allied powers. Karski carried his reports to Britain and the United States, hoping that it would shake the conscience of the world leaders or – as he would call them – the Lords of Humanity.

Jan Karski, alias “Witold,” was an eyewitness to the atrocities and mass murders committed by the Nazis in occupied Poland. He was one of the the first persons to reveal this information directly to the Western allied governments. He was sent to the Warsaw ghetto under cover on a mission to investigate the situation of Jews on the eve of the “final solution”. He aimed to reveal the shocking news about the tragedy of the Jewish people to the world. “Without the intervention of the Allies, the Jewish community will cease to exist in eighteen months’ time”, he reported in the so-called Karski Report, which was mostly based on the intel acquired firsthand, as an eyewitness.

Regrettably, the information on the Holocaust, smuggled by “Witold” to the West, only made way to the 16th page of the New York Times. Newsweek named Jan Karski one of the most outstanding personalities of 20th century, calling his wartime mission one of the moral milestones of 20th century civilization. In London The Times remarked: “Many would rank him alongside the better-known Oskar Schindler as one of the most courageous heroes of those dark years.”