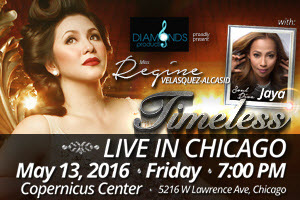 “Timeless” with Regine Velasquez and Jaya at the prestigious Copernicus Center in Chicago on May 13, 2016 at 7pm is the most awaited Filipino concert of the year. It is headlined by the Philippines’ Best Selling Artist of All Time, Miss Regine Velasquez along with the Philippines’ Soul Diva, Jaya.  Guest Appearances by Gene Flores
Together with our very own, Sama-Sama Project Louella Baron Maningas Cabalona, Jovie Calma, Chaz Chaziel Angel, Princess Santos, Jamie Llenares and Christine Sunogan

Velasquez was the first Filipino to stage a solo concert at the Main Hall of Carnegie Hall, part of Carnegie Hall’s centennial-year concert series.[1] In 2000, she performed the country’s millennial theme[2], televised in 55 broadcast networks throughout the world to coincide with midnight in Manila.

María Luisa Ramsey, better known as Jaya, is a Filipina soul music singer, rapper, dancer, record producer, presenter, and actress of mixed Visayan and Jamaican descent. She is a contract artist of GMA Artist Center. She is the first Filipino recording artist to chart in the United States, as her debut single “If You Leave Me Now” peaked at 44 at the Billboard Hot 100 chart.

Ramsey was re-christened “Jaya” in 1989 by her American producer after signing a record deal in the United States. After one year, Jaya moved to Florida, where she was offered an opportunity to finish an album that had already been started by another artist.

1995 was a turning point in Jaya’s musical career. Pilita Corrales, dubbed “Asia’s Queen of Songs”, noticed her voice after Jaya did an opening act for Corrales, Carmen Soriano, the late Bert “Tawa” Marcelo, and Elizabeth in the United States. Corrales then asked Jaya if she would like to return to Manila and record an album, to which she agreed. Jaya returned to the Philippines and signed a record deal with Viva Records in March 1995 and completed her first local album. Five songs were recorded in the US while the rest were done in the Philippines. [Source: Wiki]