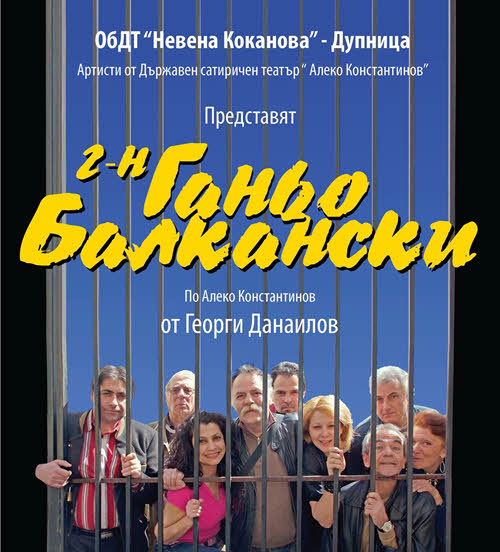 Bulgarian Theater “Nevena Kokanova” is coming to perform in Chicago the theatrical play “Mr Ganyo Balkanski” produced and based on the very popular classic novel “Bai Ganio Balkanski”, well known by every Bulgarian. The performance features artists such as:

The performance is based on Georgi Danailov’s play, “Gospodin Ganio Balkanski”. Georgi Danailov is on of Bulgaria’s most popular writers and playwrights. The play is a great cultural experience that every Bulgarian should be proud to see. The character has been originally created in 1895 by one of the greatest Bulgarian authors Aleko Konstantinov (1863-1897). Since then the character of Bay Ganio has been a subject to the creation of the iconic film “Bay Ganio” in which the role of Bay Ganio was played by one of the most inspiring comedian actors in Bulgarian theatrical and film industry Georgy Kaloyanchev (1925-2012). He is at present considered an exemplary image of an anti-hero: uneducated, ignorant, egoistic. Sometimes perceived as a stereotype of the uneducated, profit-driven Bulgarian and indeed the average Balkan person, he is often seen merely as a social stereotype, a member of the Principality of Bulgaria’s newly formed lower middle-class. 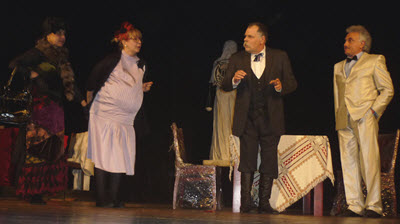 Bay is a Bulgarian honorary title to refer to older or more influential persons: the character’s first name is Ganyo, and his family name has been attested as either Ganyo Somov or Ganyo Balkanski. Bay Ganyo is the protagonist of a novel-like series of satirical feuilletons by Aleko Konstantinov. The first part of the series tells of Bay Ganyo’s journeys to various European cities and compares the character’s culture to that of their residents. The second part satirizes the political problems of the day of the post-Liberation Bulgarian society in the late 19th century.

The character has been a subject of films picturing his adventures in Bulgaria and Western Europe which were largely based on the original literary work of Aleko Konstantinov. Konstantinov was inspired to create Bay Ganyo during a visit to Chicago’s World’s Columbian Exposition in 1893. Debuting in the cinemas in a silent short of 1922, Bay Ganyo was the subject of a full-length feature film by Ivan Nichev in 1991; the character was played by Georgi Kaloyanchev. Bay Ganyo has been likened in importance and symbolism for the Bulgarians to Švejk for the Czechs, Tartarin of Tarascon for the French and Ostap Bender for the Russians.

The performances will take place as follows:

The project is coordinated, produced and brought to you by Expert Initiatives Foundation.