MozART group – The best of 20 years 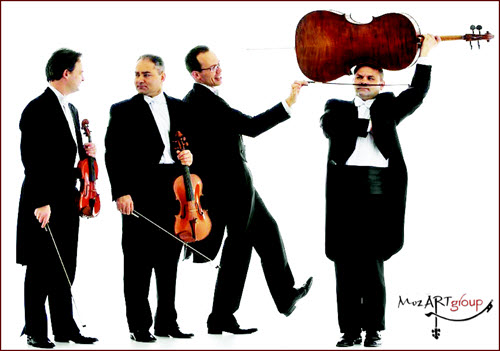 All four gentlemen of the MozART group are well educated instrumentalists who graduated from prestigious Academies of Music in Warsaw and Łódz, but they decided to play classical music in a humorous way.  The MozART group created a worldwide unique musical cabaret, where the music, not the words are the source of laughter. Take a classical composition as canvas, analyze its structure and theme, surround it with musical associations, brilliant, outstanding ideas and while listening to the final product the listener is constantly surprised, amazed, laughing and moved to tears.

This evening will remain for a long time in our memories. Twenty years on stage is a good reason to show to the audience all the funny and interesting stories of their tour history. This is why the MozART group will be presenting “MozART travels!” in the second half of 2016 – a new show, a funny point of view on unexpected situations, regional characteristics, on their and your world. Just to name a few activities in 2016: the quartet will be visiting Israel for the first time, including shows in Tel Aviv, Jerusalem and Haifa. A four weeks series of shows at the Théâtre Antoine in Paris is part of the agenda as well as the La Jolla Music Festival in San Diego / California and shows in other cities in the USA. Asia will host the quartet in 2016 again and a good number of other shows worldwide will be produced throughout the year.

See MANY MORE Hysterical Videos on their YouTube Channel