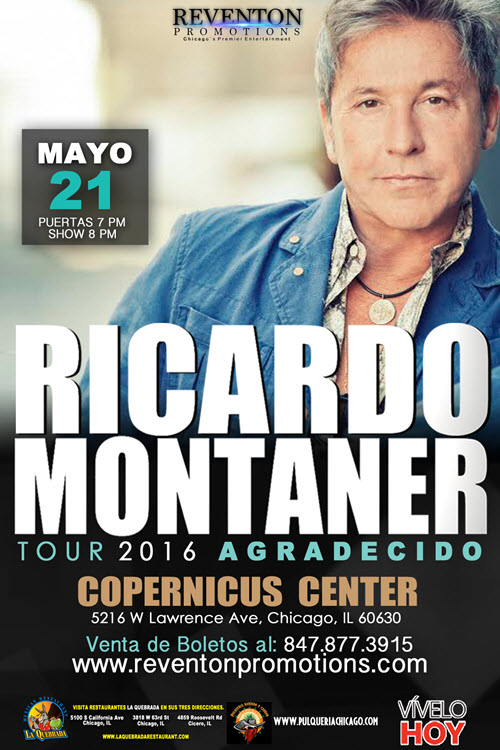 Montaner was born as Héctor Eduardo Reglero Montaner, in Valentín Alsina, Buenos Aires Province, Argentina. However, he moved to Venezuela when he was 6 years old. During his youth he performed in the church chorus in the city of Maracaibo. The first song he internationally performed, in a festival in Peru was “Canta, viejo, canta”. After this he decided to choose his artistic name Ricardo Montaner Ricardo Montaner 2 which featured hit songs like “Tan Enamorados” and “A Donde Va El Amor”. At the same time, he acted in the popular telenovela (soap opera) Niña Bonita. This also became a tool to make his songs known to the rest of Latin America. He won 4 platinum albums in Argentina alone. His next two albums, Un Toque de Misterio and En el Último Lugar del Mundo, became classics of the popular music in Mexico, Central and South America with hits such as “La Cima del Cielo”, “Me Va a Extrañar”, “Déjame Llorar” and “Será”.

By 1992 Ricardo decided to hit the Spanish Caribbean with Los Hijos del Sol, an album that contained songs like “Castillo Azul”, “Honda” and “Piel Adentro”. That year, he also recorded a duet with Michelle, which was the Latinamerican version for the Aladdin song “A Whole New World” titled “Un Mundo Ideal”. In the same year (1992), he performed in his concert on the Madison Square Garden, with more than 16,000 people who attended the concert. Additionally he released singles such as La pequeña Venecia in which he demonstrates his immense love and appreciation towards his adoptive nation Venezuela, in which he refers to Venezuela as his country. Montaner was nominated for three Lo Nuestro Awards in 1993: Pop Artist of the Year, and Pop Song and Video of the Year for the single “Castillo Azul”.

Although Montaner has written most of his songs he has worked closely with other great song writers in Latin America such as Pablo Manavello, Ilan Chester and Oscar Gómez. But in 1994, Ricardo Montaner wrote and produced all the songs in his album Una Mañana y un Camino, which became popular only years after his release due to the lack of promotion by his new record label EMI Latin, with which Ricardo would also release Viene del Alma in 1995, an Italian pop flavored album. Also in 1995 he teamed up with Yolandita Monge to establish a Guinness World Record for performing 3 concerts in different cities on the same day in Puerto Rico. This was only possible by air transportation via helicopter from stage to stage.  [above sourced from:  Wiki]