Lesson on Freedom and Independence

Lesson on Freedom and Independence with Rita Cosby 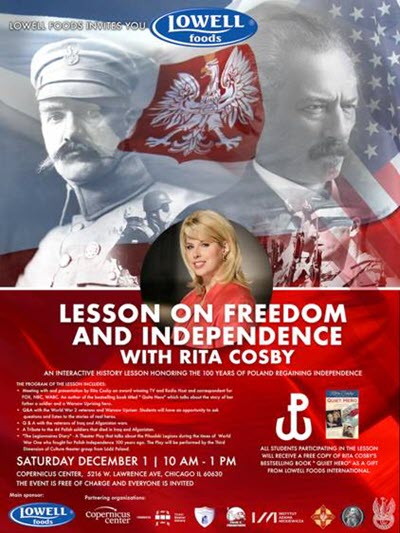 One of the first ever events of its kind in Chicago… “A Lesson on Freedom and Independence” is dedicated to inspire, educate and bring awareness to the struggle and sacrifice nations endure in order to gain and maintain their freedom and Independence.  This event will focus on topics from WWI and WWII as well as the warfare in Iraq and Afghanistan.

Lowell Foods International hosts this special event created to educate the youth about the values of Freedom and Independence.  Several WWII Polish and American military veterans will be in attendance and recognized.  As a daughter of a Warsaw Upriser, renown Emmy-winning TV/Radio Host and Best Selling Author Rita Cosby will Host the event.

Conrad Lowell, CEO of Lowell Foods and main organizer of the event stated,

“We have supported the schools and youth programs for years, but this year marks the 100th anniversary of Poland regaining its Independence, and this event will bring to the fore this historic moment for the young students of Chicago.  Freedom is not free and Polish Americans understand how critical it is to protect it at all costs.  The story of Polish Independence is the best example of that and it carries a universal message that we wanted to share with students in Chicago.”

During the event, Host Rita Cosby will share stories from her NY Times Bestselling book “QUIET HERO” heralding her own father who tirelessly fought in the Warsaw Uprising.  Having done hundreds of speeches across the country and internationally, this will mark the first time Ms. Cosby has addressed a Chicago audience to share the profound story of her father’s secret past.  Following her talk, Ms. Cosby will be joined on stage with World War II veterans as well as the veterans of the Iraq and Afghanistan wars.  The veterans will share their experiences and thoughts about the war, the fight for freedom and Independence as well as what it means and takes to preserve it.

Chicago schools numbering some 700+ students will take part in this special tribute and lesson at the Copernicus Center.  The students will prepare questions for, and interact with the veterans.

An additional highlight to the day will include a magnificent theatrical play entitled, “Legionnaires Diary – Jews in the Polish Legions” this emotional Play will recount the times of WWI and the different ethnic groups that made up the Polish Legions of Piłsudski – a father of Polish Independence.  This heroic play will be presented by the Third Dimension of Culture theatre group from Łódź, Poland.

The event is free to the public but requires a ticket. (link above)  Copernicus Center address:  5216 W Lawrence Ave, Chicago, IL 60630

For confirmation and approval, or any special interview requests, Media must contact: Tomaczek Bednarek  –  [email protected]