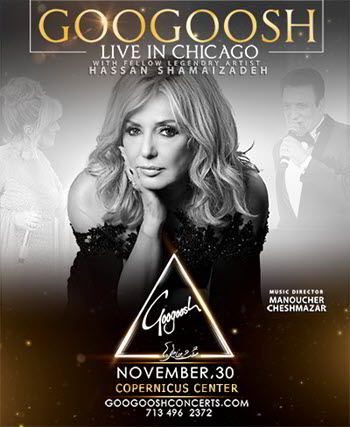 Googoosh, is an Iranian singer and actress. She is known for her contributions to Iranian pop music, but also starred in a variety of movies. She achieved the pinnacle of her fame and success towards the end of the 1970s. Her overall impact and contributions to Persian pop-music earned her the title of the most iconic female pop-singer from Iran. She has recorded songs in Persian, Azerbaijani, Turkish, Arabic, English, French, Italian and Spanish.

Googoosh’s career in the performing arts has spanned 5 decades. Born 5th May 1950 (15th Ordibehesht 1329) in Tehran to parents Saber and Nasrin, Googoosh’s life was to take a defining path when her parents divorced in 1952 and her father was awarded full custody of the two-year-old child. Saber, an actor and acrobat, took Googoosh to his many performing engagements but before long recognised his young daughter’s natural gift for singing and dancing as it became apparent that her talents eclipsed his own and drew an enthusiastic crowd wherever they went.

By her teenage years, Googoosh was regularly singing in public, putting her own stamp on the songs of established musicians such as Ghazal, Delkash, Elaheh and others. In 1966 she released “Ghesseyeh Vafa” the first of many compositions written specifically for her, on this occasion by the composer Parviz Maghsadi and lyricist Iraj Janati Attai. This was to be the birth-point of a phenomenally successful career that would soon make her a household name and take her around the world, leading to collaborations and performances with artists as varied as Ray Charles, Tina Turner, Charles Aznavour, Silvy Vartan, Sacha Distel, Romina Power, Julien Clerc, Patty Pravo, Emel Sayen and Ajda Pekan. She performed at international music festivals in France, Italy and Tunisia and had a month-long sell out run at the Eifel Tower in Paris in 1971. Googoosh was awarded the Special Cultural Medal of Tunisia in 1973 and was the only Iranian artist signed to European record companies Barclay of France and RCA of Italy. She recorded songs in English, French, Spanish and Italian, widening her reach and appeal to new audiences previously unfamiliar with her work in her native country.

In addition to the hundreds of songs she recorded as part of an established musical career, Googoosh also performed in 25 movies, with each new success eclipsing the previous and drawing unprecedented numbers of audiences to the cinema. In 1973 her acting skills were recognised with a Sepas Award for “Bita”, a film in which she played the title role. Her thespian career began with “Beem va Omeed” in 1957 and continued until just before the Iranian revolution when she starred in “Dar Emtedadeh Shab” which was to be one of the most successful Iranian motion pictures of all time.  Read more at her official Facebook Page: https://www.facebook.com/Googoosh.Officialpage/