Looking for the 2018 Bregovic concert?

A limited number of post-concert VIP meet and greet packages are available.  Each package includes an intimate meet-and-greet, featuring a photo opportunity with Goran Bregovic, a signed CD and poster by Goran Bregovic, and an official tour T-shirt (sizes are subject to availability).
Note: VIP wristbands are subject to pick up at the Copernicus Center Box Office on the night of the show by the credit card holder only. Separate concert ticket must be purchased to enter the venue.


Goran Bregovic was called, “A musical spectacle unlike anything else on North American stages” by the San Francisco Chronicle.

The sublime madness of Goran 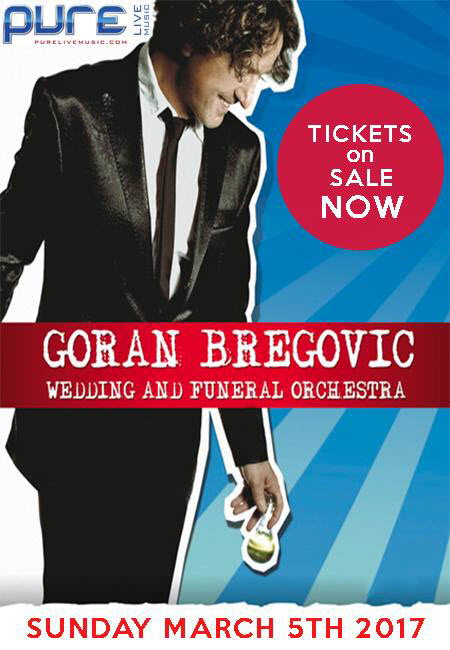 Bregovic and his Wedding and Funeral Orchestra is back for a dizzying, ecstatic reprise! This trans-Balkan musical feast features Gypsy brass players, Bulgarian vocalists and conservatory-trained string players from Belgrade in a kaleidoscope of action, color and intoxicating beats.

As the founder of Bijelo Dugme (White Button), guitarist Bregovic brought a bracing jolt of rock & roll to the Balkans in the mid-70s, selling millions of albums across the region while giving voice to a generation stifled by communist conformity. When civil war started tearing Yugoslavia apart in 1990, Goran Bregovic found himself out of the rock star business. A multi-ethnic child of Sarajevo, born to a Serbian mother and a Croatian father, he fled to Paris.

He quickly gained attention for his vivid soundtrack work for over 30 movies. Of special acclaim is director Emir Kusturica’s surreal 1993 film Arizona Dream, starring Johnny Depp and featuring the vocals of punk legend Iggy Pop. Many Americans first experienced Bregovic’s wild mélange of klezmer rock in Sacha Baron Cohen’s irreverent blockbuster film Borat, which only hinted at the experience of hearing Bregovic’s band live. This rollicking extravaganza is guaranteed to leave you cheering, with a song in your heart.

“Serbian Gypsy brass bands are party generators, and Mr. Bregovic’s compositions let them do their job.”   — The New York Times

“Bregovic is both the catalyst and ringmaster for a musical spectacle unlike anything else on north American stages.”   — The San Francisco Chronicle