Bijan Mortazavi & Mansour are excited to come to Chicago and rock the house! 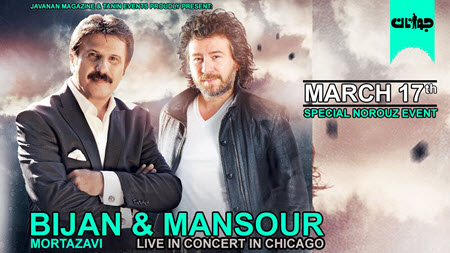 Bijan Mortazavi started playing the violin at the tender age of three. In Tehran, he was trained by five of the most respected and well–known violinists; learning specific techniques, such as improvisation, orchestration, arrangement, and quartertone scale. At the young age of seven, this talented child, continued his training with the piano, guitar, percussion, and folklore string instruments, such as the oud, tar, and santur. At age 11, Bijan won the first prize among students of all ages in a national contest. He was fourteen when he assembled a 32 man orchestra, performing his own compositions and arrangements at the famous Ramsar Summer Camp in Iran. After having graduated from high school, Bijan moved to the United Kingdom.

There, he pursued his academic interest in the field of Civil Engineering while continuing with his performances and his violin training. In 1979, Bijan moved to the United States, continued his music education at Texas State University, and finally settled in California in 1985. He released his first album, which was a best seller in 1990. What sets Bijan apart from other performers, is his ability to personally play all the instruments used in his arrangements. The national and international tour beginning in 1990 brought Bijan to sold-out audiences throughout the world. On July 3, 1994 after 34 years of playing the violin, Mr. Mortazavi became the first Iranian performer to display his indisputable talent at the Greek Theatre. One of the pieces played during this concert entitled “Epic” had been written by him when he was eleven years old. On stage, Bijan shared with his audience his boyhood dream of one day performing this particular piece on a grand scale. Thus presenting his national music to people from all around the world….his dream had come true.

What is unique about Mortazavi’s accomplishments is his immense success outside of Iran, where he is much admired among international music circles. Indeed, Mortazavi defines much of his work in the genre of light classical, and a bridge between the Eastern and Western musical traditions. Many of his songs have been performed in different languages in several countries. The quality and variety of sound he produces from the instrument is remarkable. Today, after nearly a quarter century Mr. Mortazavi remains as energetic and vibrant as ever and is universally recognized as one of Iran’s finest composers and violinists.

Mr. Mortazavi has 12 international best selling records, his latest being “Music and I” which was released on November 16, 2010. His Greek Theater performance, which includes a 53- piece orchestra in front of a sold out crowd of 6,400 is available on DVD and is a true testament to Bijan’s gift and love of music.

Mr. Mortazavi has also performed at charity events, including most recently for the Child Foundation in 2011. On November 25 of 2009, Bijan received his Fellowship (Phd) from the Southampton Solent University in Great Britain. His task is the development of contemporary Middle Eastern music in an academic form in the United Kingdom and other western countries.

Mansour is a contemporary Persian musical artist. From a new generation of rising singers of the exiled Iranian community based in Southern California, he is now ranked as one of the top male singers of the Iranian music scene. Beside Iran, he also has a fan base in Afghanistan, Iraq, Tajikistan and to a limited extent Uzbekistan and Russia.

Despite the Iranian government’s restrictions on pop music, he has nevertheless been able to eclipse other singers in gaining a wide recognition in that country. Equally popular among both men and women, his songs now serve various ceremonial openings of events, such as soccer games, weddings and private parties. Due to the lively nature of his music that has engaged and absorbed the youth of Iran, he is now permanently banned from returning or performing for any reason in that country.

Early years → Little is known of his early childhood years, though he was said to be an artistic child. Nothing is said of his propensity for music or singing at this time; however, it is speculated that with the war with Iraq at its climax, the psychology of most Iranians, young and old, was inhibited. With the devastating effects of the war and the restrictions of the clerical regime, small part of his family immigrated to the United States when Mansour was young.
Initiation

In 1991, Mansour embarked on recording his first album. A project that would eventually take three years to complete, the debutante is said to spend much time in preparation to refine his voice and vocal techniques under rigorous training lessons. He also insisted on hand-picking the producers, lyricists and arrangers for this album, all of which he financed from the revenues of a pager and cell phone store that he owned.

First album → In August 1994, Mansour’s debut album Ferferehayeh Bi Baad (started in 1991) was released through Caltex Records. Labeled as fresh and different for its upbeat and electronic pop textures, it garnered the attention of the new generation of Persian speaking youths of exiled Iranians who had become accustomed to Western music of similar type and thus easily accepted this mode of style into the Iranian music. In this album , Mansour works with some of the greatest Persian musicians such as: Siavash Ghomayshi, Abdi Yamini, Hassan Shamaeizadeh and Manouchehr Cheshmazar. And also famous lyricists like : Shahyar Ghanbari, Homayoun Hooshyarnejad and Masoud Fardmanesh.

Other albums → With the success of his first album, the pace for the singer picked up with the release of three other albums: Tasvir Akhar (1996), Daricheh (1997) and Ghayegheh Kaghazi (1998). All of these were similar to his initial work in emphasizing upbeat pop and a few number of singles from these albums became dance club hits . Some of the better known tracks of his career in this period were: “Sokooteh Shekasteh” and “Tasvireh Akhar” (from Tasvireh Akhar). “Jashneh Setarehaa” , “Daricheh” and “Aghousheh To” (from Daricheh) and “Parandehaaye Bi Vataan” (also known as “Nazanin”) , “Chashmeh Siat” and “Yaadeh To” (from Ghayegheh Kaghazi).
Mansour’s Essentials

Mansour is working on his own fragrances too, Mansour Fragrances (For Men and Women), T-shirts and other things that will available soon are all under his business agreement with Mansour USA Company. Mansour released his own fragrance on 29 December 2006 at Dubai’s Paris Gallery. For more information visit the official