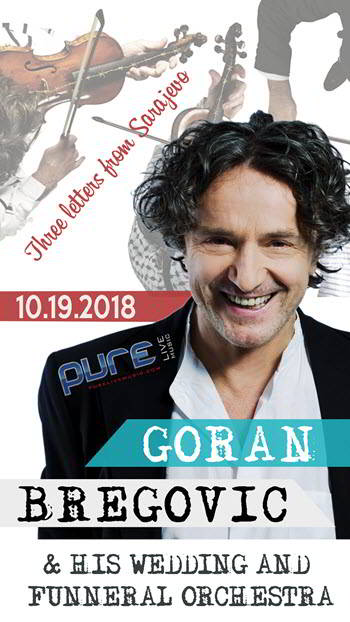 Join us for an unforgettable evening with Goran Bregovic performing songs from his new album “Three Letters From Sarajevo” along with many of his classic, high energy, Balkan brass hits!

“Goran Bregovic….always surprises us with his compositions- they’re crammed to the brim with catharsis and joy…the group channels both unbridled optimism and utter despair into succinct, sweeping vignettes.”  – Time Out Chicago

“The fashion of reviving all sorts of popular music in the most spectacular manners has recently set its heart on the musical world of the Gypsies…no one does it with the intelligence of…Goran Bregovic. The result of his inventions resemble no other. He is light years from them, both my means but even more by his ingenuity.”  – ABC, Madrid

Born in Sarajevo of a Serbian mother and a Croatian father, Goran Bregović was a teenage rock star with his first group Bijelo Dugme (White Button) before becoming the internationally celebrated composer and musician he is today. Bregović describes himself simply as a “contemporary composer” as he marries the Balkan music of his heritage with a strong guitar aesthetic, fusing Roma dance tunes and traditional Eastern European choral music with rock ‘n roll. He creates music that our soul recognizes instinctively and the body greets with an irresistible urge to dance. His return to the Copernicus Center will include the favorite tunes alongside new songs from Bregović’s latest album, Three Letters from Sarajevo.

In its history, Bosnia has been part of many empires: Roman, Byzantine, Ottoman, Austro-Hungarian…. each has left its imprint and its religion – Catholic, Orthodox, Islam and Sephardic Jews, expelled from Spain, arrive in the 16th century. Sarajevo becomes the city of four religions, ‘Jerusalem of the Balkans’, and a metaphor for a peaceful cohabitation and also the horror of hate.

From Sarajevo come the greatest number of children born of mixed marriages in ex-Yugoslavia, the First World War started in Sarajevo, in the Second World War the Muslims of Sarajevo hid the Jewish families from common enemy, images of the greatest horror dating from the recent war in Bosnia come from Sarajevo…

Bregović’s new work ” Three Letters from Sarajevo ” is inspired by the complexities of the peoples and history of Sarajevo, the city of different religions, known as ‘Jerusalem of the Balkans’. He explores and celebrates it in this unique piece written for a solo instrument, the violin, that – played in Western, Eastern and Klezmer way – unites on the allegorical level, the three religions that are the biggest treasure and curse of Sarajevo.