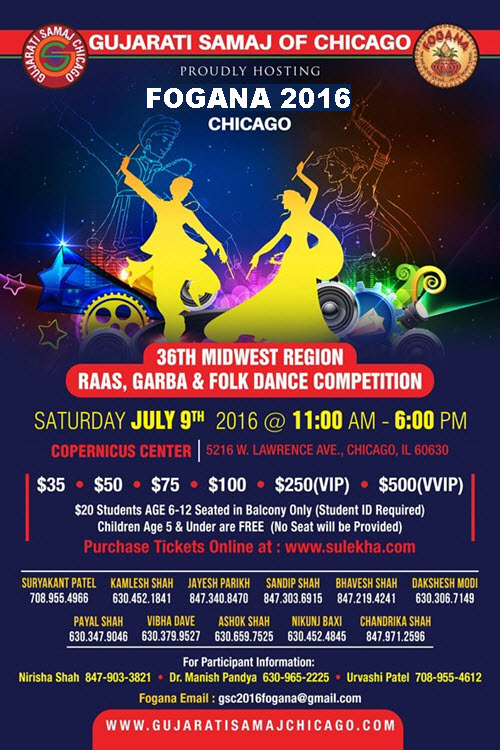 FOGANA is an acronym for The Federation of Gujarati Associations of North America, which was founded in 1980. The aim is to bring all the Gujarati people living in North America closer together by promoting a common platform to sustain and perpetuate the cultural heritage of Gujarat, India.

Folk dancing is one of the integral parts of any celebration in the Gujarati culture. In order to promote this culture and keep it alive in the younger generations, FOGANA initiated folk dance competitions in various regions.

This Midwest Region show begins with the traditional lighting of the lamps. The teams will be divided by age, and will be judge on expression, synchronization and dressing.

Within each age group, there are three categories: Garba, Raas and Folk Dance. This program is sponsor by Gujarati Samaj Chicago.

The hospitality committee has arranged for special rates for participants, parents, and guests at: Best Western Chicago Hillside, 4400 Frontage Rd., Hillside, IL 60162 – (708-544-9300). The rooms must be confirmed by June 4, 2016, otherwise the hotel will release the rooms.