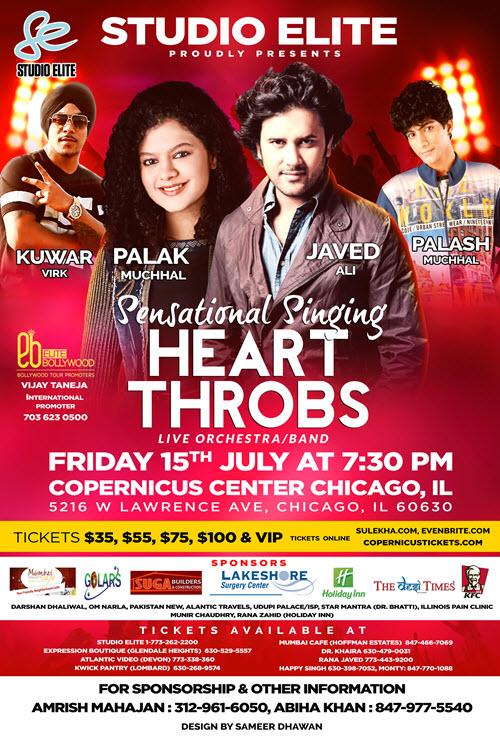 The group SENSATIONAL SINGING HEARTTHROBS comprises of 14 members out of which 4(Four) are singers and 11 are musicians, technicians and support staff.

JAVED ALI:  Javed Ali is an Indian playback singer who has been singing in Hindi movies since 2000. He was noted for his first hit by rendering of the KaJra Re… Kajra Re in the 2006 movie Bunty Aur Babli . In 2007 with the song “Ek Din Teri Rahon main” in the film “Naqaab”, “Nagada Nagada” for movie Jab We Met, “Jashn-e-Bahara” in the epic film Jodha Akbar, ‘Guzarish’ from Amir Khan’s movie Ghajani all for  the Oscar award winner music composer A.R. Rehman. He has also sung Sufi song “Arziyaan” from the film Delhi 6, “Kun Fayaa Kun” from Rockstar which was critically appreciated worldwide.  His latest release is “Tu Jo Mila” from the film “Bajarangi Bhaujaan”. Currently he is singing in 16 different Indian languages for all leading stars.

He won 19th Screen Award 2012 in the Best Play Back Singer Category for song Ishqzaade titile , and winner of 4 (four) Radio Mirchi Award 2012 in categories,  Best Song Representing Sufi Tradition – “Kun Faya Kun” from Rockstar, Best Indipop Song “Mera Kya Saheb Hai tera” from Dil Ki Baatein, Best Album of the year and Best Album of the Year- Mirchi listener Award for Rockstar. Uttar Pradesh Government has Honoured Javed Ali with the prestigious and one of the highest award of the state, “Yash Bharti Samman” this year.  In past we won 2008 best playback singer international IIFA Award at Macao, China and first Radio Mirchi award for “Jashn-E- Bahara” of Jodha Akbar and also best song of the year “Guzarish” of Ghajani.

PALAK MUCHHAL: Palak Muchhal is a singer from Indore, Madhya Pradesh, India. She and her younger brother Palash Muchhal perform stage shows across India and abroad to raise funds for the poor children who need financial assistance for the medical treatment of heart diseases. As of August 2015, she has raised funds through her charity shows, which has helped to save lives of 800 children suffering from heart ailments. Muchhal has made her entry in both Guinness Book of World Records and Limca Book of World Records for great achievements in social work. Her work is also recognized by the Government of India and other public institutions through various awards and honors.

PALASH MUCHHAL: Palash Muchhal is a Music Composer from India. He and his elder sister Palak Muchhal perform stage shows across India and abroad to raise funds for poor children who need financial assistance for the medical treatment of heart disease. As of May 2013 they have raised funds of INR25 million (US$390,000) through her charity shows which has helped to save lives of 572 children suffering from heart ailments. Palsh Muchhal is the youngest music composer/director in Bollywood (India) at 18. He has recently entered his name in golden book of world records as the youngest music composer of Bollywood. His debut movie – Dishkiyaoon was released on 28 March 2014. He has also given music in Bhoothnath Returns, Dishkiyaoon, Amit Sahni Ki List. His famous songs are “Party Toh Banti Hai” from Bhoothnath Returns, “Tu hi hai aashiqui” from Dishkiyaoon and “What The Fark” from Amit Sahni Ki List.

KWAR VIRK: Kuwar Pal Singh is popularly known as Kwar Virk in the Punjab film Industry. He has started his carrier in 2010 as Hip-Hop rap artist. He has commercial and grassroots success, with several top singles in the Punjabi Industry.His first track “Nakhra” featuring with singer Mika Singh & Kaptaan Laadi did so well that it caught the ear of Punjabi singer Ashok Masti famed “Glassy” with Yo Yo Honey Singh”. Kuwar Virk quickly expanded his global reach on a huge collaboration Punjabi super star, Preet Harpal, their single “Kangna” became a hit all over Punjab industry. He is a winner of Punjab Mirchi Music Award for best album of the year.