Lords of the Ribs with Basketmouth

The Lords of the Ribs with Basketmouth in Chicago 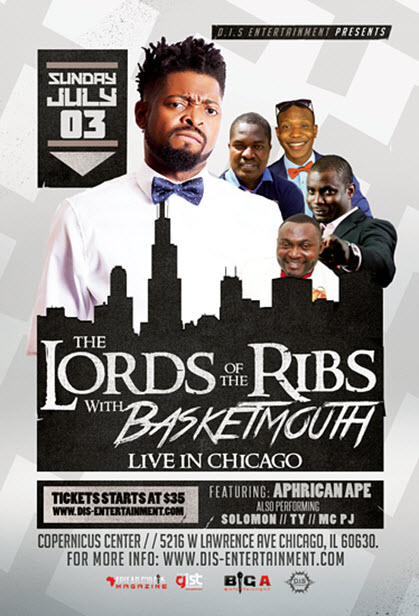 D.I.S Entertainment Present the Lords of The Ribs with Africa’s Biggest Comedian “Basket mouth” will be Live in Chicago on Sunday, July 3rd, 2016.

The evening promises to be full an evening of laughter, entertainment, and fun. This event will be hosted by one of the funniest African Comedian living in the U.S – Aphrican Ape featuring some of the funniest Chicago African Comedians /Dancers – MC PJ, TY, Solomon and the dance group “African Kings will showcase their amazing dance skills to get audience ready for an evening of laughs with Basket Mouth.

This is a family event, so you are invited to come with you friends, family, or significant other.
Basketmouth, is a African comedian and actor. He has organized popular stand-up comedy concerts like Basketmouth Uncensored across the globe.

Basketmouth, a leading player in the comedy industry in Nigeria and having represented the Stand-up Comedy genre as one of Nigeria and Africa’s leading exports, the Basketmouth brand has over the years won hearts of Nigerians and non-Nigerians.

Basket over the years has hosted concerts featuring Jay Z, Rihanna, Beyonce, Joe, Chris Brown, Boys 2 men, Sean Paul, Wyclef Jean, Cool and the gang, Akon, Dru Hill,Buster Rhymes,, Fat Joe, Snoop Dogg, Ciara, Jarule, Brian McKnight and many more.
Basketmouth has headlined shows all over Africa, including South Africa, Ghana, Tanzania, Zambia, Kenya, Ethiopia etc, in 2013 he was approached by Comedy Central to his his own special and in 2014 was invited to be a part of Just for Laughs ‘one of the biggest comedy festival in the world’

During these defining years, Basketmouth and his team launched his one-man standup comedy concert tagged ‘Basketmouth Uncensored’ a show that reached every form of success, the show witnessed 4 years (2005-2009) and each of the installment was a sold out concert, he stopped hosting the show to introduce other comedy brand ‘Lords of the Ribs, Nigerian Kings of comedy, African Kings of Comedy & Laffs n Jamz’ in 2014 Basketmouth re-launched his one man comedy show which was unarguably one of the best he has done.

In Feb 21st 2010, he became the 1st African comedian to host a one man comedy concert at the HMV Hammersmith Apollo, which was a huge success, till date Basketmouth has hosted 9 different concerts in the UK including Basketmouth Uncensored Live @ the o2, Nigerian Kings of Comedy, The African Kings of Comedy, hosted Comedy Central presents in South Africa, Lords of The Ribs, and many more.

Basketmouth last year had his debut performance at the famous comedy stores on sunset strip in Los Angeles, where he performed alongside ‘ Tony Baker, Mason Pryo, Malanie Camarcho, he has also shared stage with comedians like Deray Davis, Tony Roberts, Red Grant, Robert Powell, Donnovan, , Michael Blackson, Trevor Noah, Griff, David Kau and more.
In 2011 he was approached by Mtv Base to host his own show ‘The Big Friday Show’ the TV show went on to win the best TV show in 2013.Basketmouth is presently one of the brand ambassadors of one of the leading telecommunication companies in Africa (Globacom) a brand face for Dana Air, a leading Airline company in Nigeria. BM stands out as one of the names in the entertainment industry to reckon with.