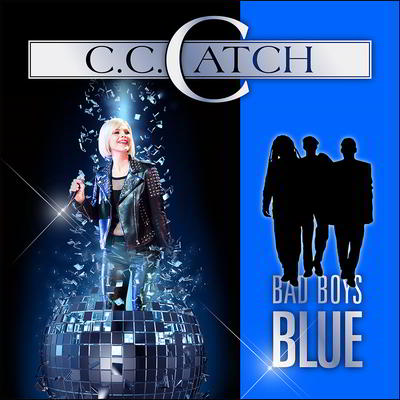 → Two Iconic Artists Under One Roof

Known for their greatest Euro-Pop music from the 80s, Queen of Disco C.C.Catch with biggest Hits: Jump in My Car, Heaven and Hell.. And Bad Boys Blue with Hits like : Pretty Young Girl and You’re a Woman makes history by coming to Chicago, for the first time together!

Born Caroline Catharina Müller in the Netherlands, she moved with her family to Germany in the late ’70s. In 1980, she became a member of the girl quartet Optimal, who issued two singles. During one of the band’s concerts in Hamburg, she was approached by songwriter/producer Dieter Bohlen who had just taken the continental charts by storm with his duo Modern Talking. She signed up with Bohlen who then changed her stage name to C.C. Catch, and the debut single of the newly christened singer — “I Can Lose My Heart Tonight” — was released in the summer of 1985.

Her collaboration with Bohlen lasted until 1989, resulted in four albums and 12 singles, and made C.C. Catch a queen of continental discos.

The history of Bad Boys Blue started in Cologne (Germany) back in 1984, when the founders of Coconut Records – Tony Hendrik and his wife, Karin van Haaren (vel Karin Hartmann), decided to create a new music project.  Following a long history of singles and albums, Coconut Music/Pokorny Music Solutions/Sony Music released the 30th anniversary single titled “You’re A Woman 2015” in early June.  On June 26th of 2015 the 30th anniversary album titled “30” was released and including reloaded versions of the hit singles (produced with using of the original 24 track tapes), a few new hit versions as well as some unreleased remixes and demo tracks.