Two Windows on Poland in the 20th Century 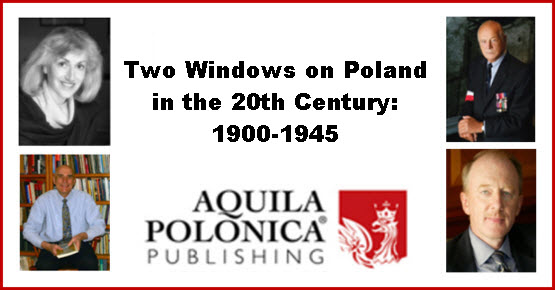 The speakers present a multimedia program introducing Aquila Polonica Publishing and looking at two pivotal events of the 20th century: pianist Ignacy Jan Paderewski’s role in ensuring re-establishment of Poland as an independent state after WWI; and the impacts of WWII on Poland.

This event is one of the many adjunct events during BookExpo America (BEA).  Hashtag #BEA16

Aquila Polonica Authors in Chicago May 10–14:

John Guzlowski immigrated to America in the early 1950s as a war refugee during the last great refugee crisis—post-WWII Europe. His parents had been taken as slave laborers by the Germans and barely survived; his sister and he were born in Displaced Persons camps. John’s newest book, Echoes of Tattered Tongues: Memory Unfolded, describes the war refugee experience, using an innovative structure of poetry, prose and prose poems that unfold backwards in time.

Julian Kulski was a 10-year-old Boy Scout when the Germans invaded his home country of Poland. At age 12, he was recruited into the Polish Underground Army by his Scoutmaster, and among other adventures, fought as a teen-age commando in the 1944 Warsaw Uprising. Today retired from a distinguished career as an architect, Julian lectures to groups small and large about his first-hand knowledge of the price of freedom and the costs of war. His war diary, The Color of Courage, which was written in 1945 as doctor-prescribed therapy when Julian was a 16-year-old veteran suffering from PTSD, recounts his journey from Boy Scout to soldier to POW.

Marek Zebrowski, Director of the Polish Music Center at the University of Southern California, is an accomplished concert pianist, composer and author. Marek, who is a Steinway artist, has performed throughout the world, records for several different labels, and collaborates with film director David Lynch. He is bringing to BEA two books authored by him, and several additional titles published by the USC Polish Music Center. Although not an Aquila Polonica author per se, Marek has cooperated extensively with Aquila Polonica on a number of projects, and is attending BEA under the Aquila Polonica umbrella.

The Copernicus Foundation is proud to provide underwriting through the use of the Copernicus Center facilities for this event.

BookExpo America (BEA), the largest book show in the U.S., is in Chicago this year, and Poland is the featured country!

Aquila Polonica, the award-winning independent publisher based in Los Angeles, which celebrates Polish heroism in WWII in all its books, will be sharing booth space with the official exhibit by the Polish Book Institute, booth 1504/1505—showcasing Aquila Polonica titles and bringing three authors who will be doing events at BEA and BookCon, and in the Chicago area all week.

Aquila Polonica president Terry Tegnazian says, “Poland’s role as one of our Allies in WWII is one of the most heroic and tragic of the war, but is little known in the West. People are surprised when I tell them I’m not Polish. I fell in love with this story when I was doing research for a novel and thought, ‘I have to get this out into the world.’ ”

“Aquila Polonica is probably the finest and most successful publisher of Polish books in the United States,” says Sarmatian Review. See more at www.AquilaPolonica.com

With BEA’s focus on Poland this year, Tegnazian also wanted to demonstrate the greater impact of Poles and Poland in books. She conceived and organized a “Books in English” exhibit as part of the official Polish Book Institute booth, curating a selection of more than 100 books in English about Poland—including works of fiction, history, cookery, music, and much more—by a variety of publishers and authors.

The “Books in English” display is in addition to Aquila Polonica titles, and the books and authors being brought from Poland by the Polish Book Institute. It is accompanied by a 20-page catalogue available in print form at the booth, which may also be downloaded at www.polww2.com/BEA2016Books

BEA will be held at McCormick Place Convention Center in Chicago, from Wednesday, May 11 through Friday, May 13, and is open to the trade only, www.bookexpoamerica.com. On Saturday, May 14, its companion show, BookCon, is open to the public; tickets required, www.thebookcon.com

Additional Events in the Chicago Area —All FREE & Open to the Public!: