Lance Lipinsky & the Lovers + Trippin Billies (hear them below)

The Copernicus Foundation is happy to announce its 2021 8-week Outdoor Summer Concert Series. Beginning Saturday July 10th music lovers of all ages can come enjoy live bands at the Copernicus Center in Jefferson Park. There is no better way to enjoy your summer nights than under the stars, with your favorite bands and local kitchen. Rain or shine, our campus will be waiting to welcome you back to the summer Chicago has missed so much.

Our full bar and kitchen will be ready to serve you under the lights as you bop to your favorite tunes. Only at the Copernicus Center July 10th – August 28th, 2021. Doors open 5pm. 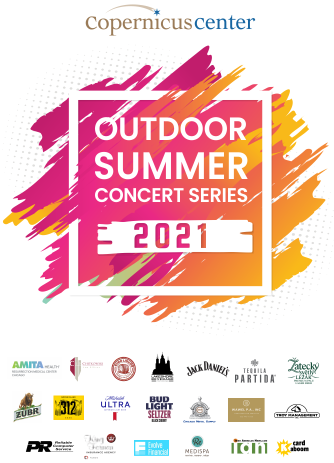 This event will follow CDC guidelines as well as city ordinances.

Influenced by the birth of Rock & Roll era of the 1950’s and 60’s, Wimberley, Texas born Lance Lipinsky preserves the timeless tradition of mid century American roots music in both his songwriting and his live power house, piano stage show antics. Accompanied by his Chicago-based group The Lovers, Lipinsky’s driving Jerry Lee Lewis piano rhythms and Presley inspired swagger in his own persona has led him to appear on both the David Letterman Show and at the Ryman Auditorium in Nashville, TN. Recently Lance was featured in the HBO series “Vinyl” directed by Mick Jagger and Martin Scorsese and was the recipient of the 2017 Ameripolitan Award in the “Male Rockabilly” category.


After headlining over 2500 action packed shows for five years at the Apollo Theatre in the TONY award winning Broadway musical “Million Dollar Quartet,” Lipinsky’s debut album “Roll” was recorded in Memphis’ historic Sun Studios using all original, vintage analog equipment. “What’s good doesn’t die,” is a birthright motto Lipinsky displayed since childhood. With no formal training, his dad’s life long vinyl record collection contributed to a self-taught education on piano and guitar as he was instantly possessed by music before his time. As a new sound emerged in the mid 1950’s, flocks of guitar marketed themed singers dominated the scene. In this new arena called Rock & Roll, only a hand few of front men in mainstream pop music history stood behind a piano. Not much has changed almost 60 years later as Lipinsky himself is part of this rare breed as a new age early Rock & Roll piano-based entertainer and songwriter. These influences can be heard in his debut album Roll, filled with the romance, and fine line between danger and innocence that defined early Rock. Lipinsky’s songwriting and live showmanship can be described as a continuation – a much awaited novel sequel to a style born in the Atomic age of the 50’s. Some would label it and dismiss it as “oldies” or “nostalgia,” but artists like Lance devoted to the Roots music movement remind us that this style is not just a mere trend from the past, but rather its own genre that is still alive and well and standing the test of time. While traveling internationally, Lance’s band The Lovers are still based out of Chicago and continue to perform in the Midwest.  Website  ~  Facebook

“The nation’s most renown, original and longest touring tribute to the Dave Matthews Band” -Google
Bringing fans the music of The Dave Matthews Band for close to twenty years, Trippin’ Billies has become the gold standard for tribute bands. Based out of Chicago, the Billies have toured extensively throughout the U.S. performing at many of the same theaters Dave himself once graced. Comprised of some of the best musicians in Chicago, (WXRT) one need not be a diehard DMB fan to enjoy a show. The high-energy performance and caliber of musicianship will have you singing along by the second chorus. But if you are a fan of the Dave Matthews band, don’t walk, run to see this band. Relix magazine has named them top five tributes in the country for good reason, come find out why.     Website  ~  Facebook