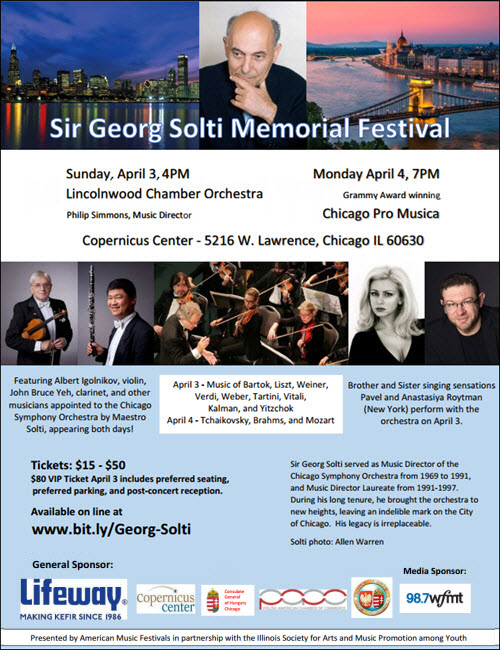 Purchase a second concert for $5 DISCOUNT.   Enter your email address as Promo Code.

Sir Georg Solti was Music Director of the Chicago Symphony Orchestra (CSO) from 1969 to 1991, and Music Director Laureate from 1991 to 1997. He left an indelible mark on the City of Chicago and the musicians he worked with, who will remember him in two performances at the Festival.

Albert Igolnikov came to the Chicago Symphony Orchestra in 1979 from the Soviet Union with a music background gained entirely there. He was named assistant principal of the orchestra’s second violin 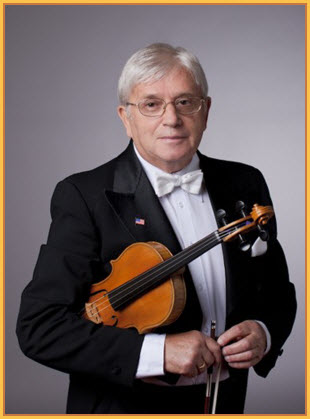 section in 1989. He served as assistant concertmaster for three of the 20 years he spent with the Leningrad Philharmonic Academic Symphony, under Yevgeny Mravinsky, and was first violinist of a quartet comprised of members of the Leningrad Orchestra. His formal education included six years of study at the Leningrad Conservatory with Julian Eidlin, a pupil of Leopold Auer. Mr. Igolnikov emigrated to the United States in June 1979, and gave his first performance in America one month later at the Soviet Emigré Music Festival in Carnegie Hall. He lived in New York for a short time before joining the CSO.

Since his arrival in Chicago, Albert Igolnikov has been active in local chamber music circles and has performed regularly on the CSO Chamber Music series. He is a founding member of the New Russian Trio and Chicago Pro Musica, which received a 1986 Grammy® Award as Best New Classical Artist for its debut recordings. He has toured the United States, Europe, Australia, Japan and Russia with both ensembles. Mr. Igolnikov has been featured as a recitalist on WFMT. He also has appeared as soloist with the CSO on subscription concerts in Bach’s Concerto for Two Violins (with Jennie Wagner) under Sir Georg Solti (1986) and in Rimsky-Korsakov’s Fantasia on Russian Themes under Daniel Barenboim (1995). Mr. Igolnikov plays a violin made by Guadagnini, of Turin, in 1780.

John Bruce Yeh joined the Chicago Symphony Orchestra in 1977, the first Asian musician ever appointed to the CSO, and is now the longest-serving clarinetist in CSO history. Having joined the CSO 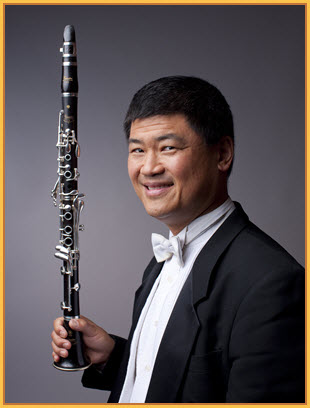 at the invitation of Sir Georg Solti as Clarinetist and Solo Bass Clarinetist, John is currently Assistant Principal and Solo E-flat Clarinet of the orchestra. He served the CSO as Acting Principal Clarinet from 2008-2011, and has also performed as guest principal of The Philadelphia Orchestra and the Seoul Philharmonic in Korea. A prize winner at both the 1982 Munich International Music Competition and the 1985 Naumburg Clarinet Competition in New York, Yeh continues to solo with orchestras around the globe. An enthusiastic champion of new music, John Bruce Yeh is the dedicatee of new works for clarinet by numerous composers, ranging from Ralph Shapey to John Williams.

His more than a dozen solo and chamber music recordings have earned worldwide critical acclaim. Recently released by Naxos is a disc titled “Synergy,” of single and double concertos with clarinet featuring John, his wife Teresa, and his daughter Molly. Yeh is director of Chicago Pro Musica, which received the Grammy Award in 1986 as Best New Classical Artist. With clarinetist Teresa Reilly, erhu virtuoso Wang Guowei, and pipa virtuoso Yang Wei, Yeh recently formed Birds and Phoenix, an innovative quartet dedicated to musical exploration by bridging Eastern and Western musical cultures. John is on the artist-faculties of Roosevelt University’s Chicago College for the Performing Arts and Midwest Young Artists in Fort Sheridan, Illinois. He is the proud father of Jenna Yeh, 30, a culinary artist and wine specialist in Chicago; Molly Yeh, 26, a percussionist and award-winning blogger in Minnesota; and the 9-year old Mia Reilly-Yeh.

is a New York resident, and a graduate of the Manhattan School of Music (NY) and the Gnessin Academy (Moscow, Russia). Ms. Roytman has performed on some of the world’s most prestigious stages, including Carnegie Hall, the Bolshoi Theatre and the International House of Music in Moscow (Russia), Mozarthaus in Vienna (Austria), and the Seoul Performing Arts Center (Korea).

Baritone Pavel Roytman is a native of Nikolaev, Ukraine. He studied piano playing and conducting at the Kaliningrad Rachmaninov Music College and later at Petrozavodsk Glazunov State Conservatory, both in Russia. After emigrating to the USA, he received a Bachelor’s Degree in Voice Performance from De Paul University and a Master’s Degree in Musicology at Northwestern University. Cantor Roytman received a 1st prize in the category of Voice/Cantorial Singing in the 2nd Annual Golden Hanukkiah Competition held in Berlin. 2004. He is currently Hazzan at Beth Hillel Congregation Bnai Emunah in Wilmette, IL.

Center, the Musikverein, Saint Petersburg’s Philharmonic Hall, and the Great Hall of the Tchaikovsky Conservatory. He is Artistic Director of American Music Festivals, Founder and Music Director of the Lincolnwood Chamber Orchestra, and Resident Conductor of the Orchestra of the Hawaiian Islands.

Mr. Simmons has conducted dozens of concerts at the Copernicus Center, including performances with the LCO, Lake Shore Symphony, and on the Chicago Summer Silent Film Festival. His recordings include “Impressions of Saint Petersburg” (dedicated to Maestro Yuri Temirkanov, 2000), music of Alexander Tcherepnin (2003), and the soundtrack to “Moonlight” (2013). In 1989 he attended the conducting seminar at Tanglewood Music Center, the last year it was coached by Leonard Bernstein.

The Lincolnwood Chamber Orchestra (LCO) recently celebrated its 25th Anniversary. The orchestra regularly performs concerts in the Village of Lincolnwood and has appeared at the Harris Theater in Chicago, North Shore Center for the Performing Arts, Preston Bradley Hall of the Chicago Cultural Center, Northeastern Illinois University, Lutkin Hall of Northwestern University, and the Illinois Holocaust Museum and Education Center. Soloists which have performed with the LCO include William Warfield, Lukas Foss, Wendy Warner, Rachel Barton Pine, and Chicago Symphony Orchestra musicians Albert Igolnikov, John Bruce Yeh, Sam Magad and Charles Pikler. The LCO was named “Chamber Ensemble of the Year, 2000” by the Illinois Council of Orchestras.

Chicago Pro Musica was honored with the 1986 Grammy Award for Best New Classical Artist, the only ensemble in the history of the National Academy of Arts and Sciences ever to achieve this distinction. For 30 years the ensemble has continued to feature virtuoso musicians from the Chicago Symphony Orchestra. The Chicago Tribune has called them “one of the most versatile and artistically accomplished [ensembles] on the American chamber music scene.” They regularly perform at Chicago Symphony Center and have appeared throughout the United States, Europe, Australia, Japan and Russia. In 2012, they performed a special concert in the Glinka Philharmonic Hall in Saint Petersburg, in memory of Yevgeny Mravinsky, long time Music Director of the Leningrad Philharmonic.

American Music Festivals is a nonprofit committed to cultural exchange and promoting American music around the world. In Chicago it is the presenter of the Lincolnwood Chamber Orchestra. American Music Festivals collaborates with like-minded civic, educational, and other performing arts and cultural organizations to present programs which feature diversity and inclusivity. 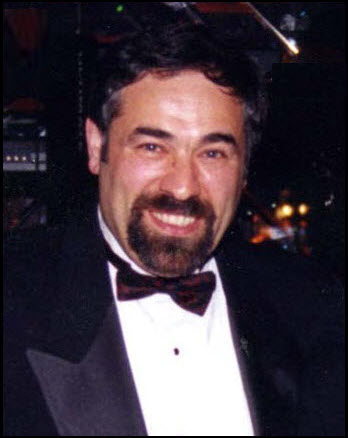 partnership with the Illinois Society for the Promotion of Arts and Music among Youth, providing cultural access to underprivileged students and young musicians throughout Chicagoland.

Alex Babich is the Executive Director and Project Coordinator of the Illinois Society for the Promotion of Arts and Music among Youth. This organization is collaborating with American Music Festivals on an educational outreach program benefiting thousands of students and their families.

The Copernicus Foundation is proud to provide underwriting through the use of the Copernicus Center facilities for this event.