Presented by Ignite The Spirit 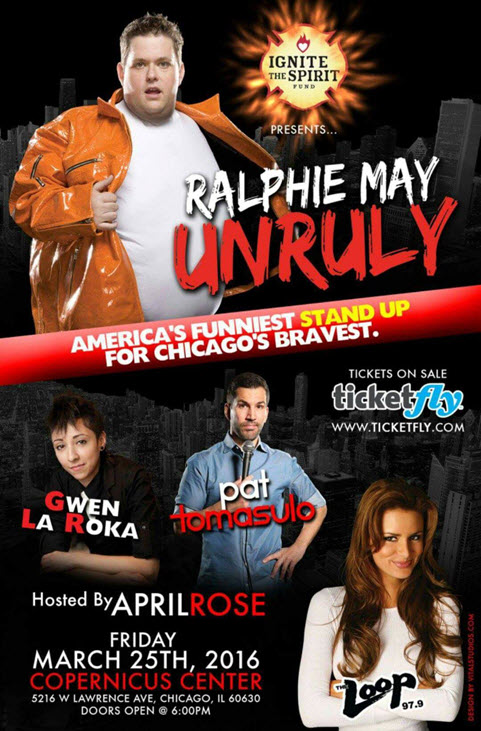 For 25 years now, Ralphie May has appeared at the biggest venues, slayed every late-night audience multiple times, recorded a special for every comedy-loving network on television, traveled the world for the USO and reached the level of popularity few standup comedians have attained.

Yet little compares to the amount of exposure May received when Netflix exclusively launched his new comedy special “Unruly” on Februrary 27th, at the same time it released the new season of “House of Cards.”

“That’s the biggest launch in Netflix history,” May said. “The wave for ‘House of Cards’ is a tsunami and I’m the fat guy trying to body surf. These guys are taking me to the middle of the country. They’re taking me into people’s homes. I’m the luckiest guy in America.”

The raw, uncensored hallmarks of his mentor Kinison are evident in May’s set, laid out brilliantly over two hours in “Unruly,” recorded in front of a raucous, fist-pumping crowd of thousands in Atlanta. But May doesn’t deal in simple outrage, building a routine that’s rich, deep and fearless. He’s able to balance boyish charm, withering introspection and compassion for his fellow human being with some of the dirtiest, most honest observations you’ve ever heard.

In the uncensored and unfiltered “Unruly,” he riffs on pop culture, race, his own excesses, the dangers of meeting Anderson Cooper and the mesmerizing deliciousness of Chick-Fil-A. With the increased visibility of the Netflix partnership, May hopes to fill the next 25 years of his career with even more breathless moments.

Viewership expectations are high. May debuted five specials over a decade on Comedy Central with each drawing record ratings. He also tours extensively and has made 19 trips into war zones to perform for troops with the USO and Wounded Warriors charity. And his popularity continues to grow. He and his family split their time between Nashville and Los Angeles, where he has television development deals for an unscripted reality show with Ryan Seacrest Productions and a scripted series with Will Ferrell’s Gary Sanchez Productions.

ABOUT IGNITE THE SPIRIT

The Board Members of Ignite the Spirit would like for you to be aware of the countless efforts that our charity represents, such as community involvement, assisting our brothers and sisters of the Chicago Fire Department ( #CFD ), and the passion and commitment to make a difference.

Ignite the Spirit is a charity that has been around since 2003 and has helped over 350 families in need. Ignite the Spirit has donated almost a million dollars to ease the hardship of Chicago Fire Department families.

Share the short link to this page with your friends.   bit.ly/Ralphie-May-CFD