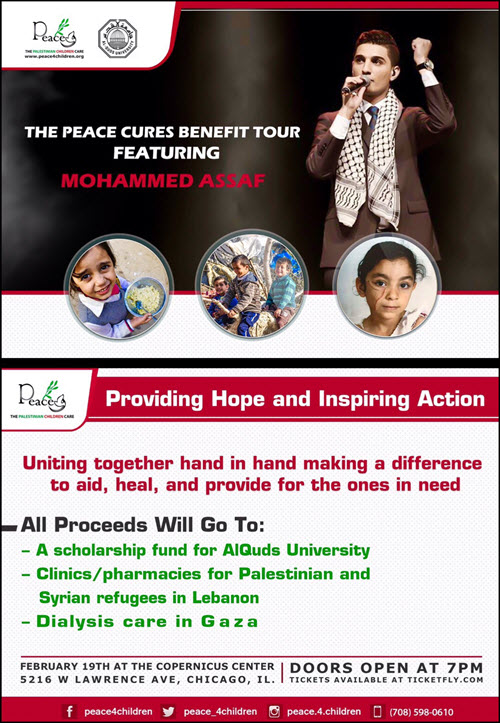 1) a scholarship fund for Al-Quds University
2) dialysis care in Gaza
3) clinics / pharmacies for Palestinian and Syrian refugees in Lebanon.

“Peace” is a 501(C) 3 nonprofit tax-exempt organization. Updates will be communicated periodically via all media outlets.

Sharing link to this Page:  http://bit.ly/Mohammad-Assaf

Mohammed Assaf (Arabic: محمد عساف‎; born 1 September 1989) is a Palestinian pop singer well known for being the winner of the second season of Arab Idol, broadcast by the MBC network. He was given the nickname Asaroukh (“The Rocket”) by Lebanese singer and Arab Idol judge Ragheb Alama. In 2013, Assaf was named a goodwill ambassador for peace by The United Nations Relief and Works Agency for Palestine Refugees (UNRWA). He was also named ambassador of culture and arts by the Palestinian government and was offered a position with “diplomatic standing” by the Palestinian president Mahmood Abbas.

Assaf was acclaimed by the jury and the public. His voice and appearance have drawn comparisons to Egyptian singer Abdel Halim Hafez, which has garnered Assaf both fame and controversy. Fans merged part of Hafez’s name with Assaf’s, as in Assaf Hilm Falastine (“Assaf Palestine’s Dream”). His victory received world-wide coverage from the media and was welcomed with joy by Palestinians and the rest of the Arab world.

Assaf’s story is the basis of the 2015 The Idol, directed by Hany Abu-Assad.

Mohammed Assaf traveled from Gaza Strip to Egypt to audition for Arab Idol. It took him two days to reach Egypt by car due to complications on the border. At the beginning, he had to convince the Egyptian security at the border crossing, where he was stuck for two days, to leave Gaza. Once he reached the hotel where the auditions were taking place, the doors were closed in which they did not accept anymore auditions so he jumped over the wall. After he jumped over the wall, he couldn’t get a number to audition; he sat hopelessly in the hall where other contestants were waiting for their turn. He started singing to the contestants, and a Palestinian contestant, Ramadan Abu Nahel, who was waiting to audition heard him and gave him his number saying, “I know I won’t reach the finals but you will.”

Assaf’s final performance was his rendition of “Ali al-keffiyeh” (“Raise Your Keffiyeh”), a Palestinian nationalist anthem and called on Palestinians to raise their keffiyehs (a traditional Arab headdress that has become a Palestinian nationalist symbol) and to unite, in light of the split between the two major Palestinian factions, Hamas and Fatah. Hundreds of thousands of Palestinians had tuned in to watch his performance. On 22 June Assaf was declared the winner of Arab Idol, winning the most votes and coming ahead of two other competitors, Ahmed Gamal and Farah Youssef, from Egypt and Syria, respectively. Massive celebrations by Palestinians ensued after the announcement of his victory, including festivities held on the streets of Gaza City, East Jerusalem, Nablus, Ramallah, Bethlehem, Khan Yunis, Nazareth, Lebanon and Jordan.  [source:  Wikipedia]


The Copernicus Center is proud to host Palestinian Events in Chicago.