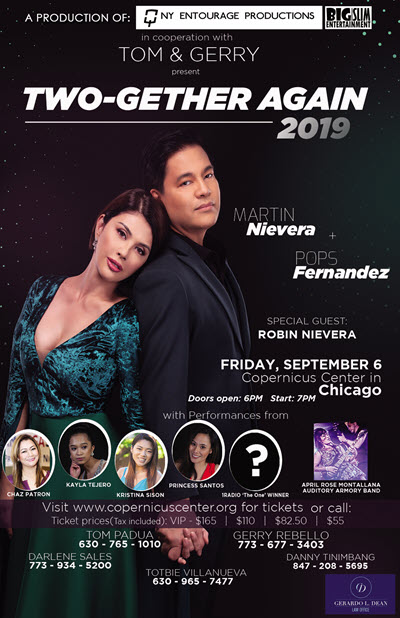 BIG SLIM Entertainment and TOM & GERRY presents Martin Nievera and Pops Fernandez → “Two-Gether Again 2019.” The long wait is finally over. After more than a decade of waiting, … Finally they said YES!

The Legendary Filipino singer & songwriter tandem Martin & Pops reunite once again to embark on their US Tour! Don’t miss this chance to see these two icons take the stage on September 6, 2019 at the Copernicus Center in Chicago!

Crooner Martin Nievera is often called the “Concert King” of the Philippines and Pops Fernandez as the “Concert Queen.” Pops Fernandez is undeniably one of the Filipino singers that have left a mark in the singing industry in the Philippines. Both of them hosted the then famous TV Variety Show “Penthouse  Live.”  It was later changed to “Martin & Pops Twogether” reflecting the duos marriage.

Martin Nievera & Pops Fernandez are among the in-demand artists not only the Philippines but as well as abroad. Who knows…this might be their last performance together in the concert scene. So Buy your Tickets now before they run out.

COPERNICUS CENTER BOX OFFICE HOURS:  2 hours before each event OR Saturdays → 3 to 5 pm OR Sundays → 1 to 3 pm
Public Service Announcement