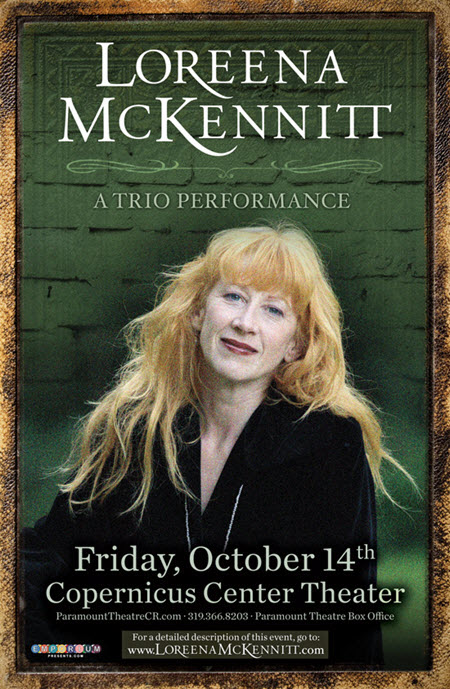 Celebrating three decades as Canada’s foremost, groundbreaking independent artist, Loreena McKennit is set to bring a rare and intimate tour to select venues across the U.S. and Canada this fall, including the Copernicus Center in Chicago. This unique series will feature McKennitt in the trio formation which garnered her a 2012 Grammy nomination for Troubadours on the Rhine.

McKennitt will be joined by longtime collaborators Brian Hughes and Caroline Lavelle for an atmospheric evening featuring music and tales insprired by McKennitt’s exotic travels in pursuit of the history of the Celts.

Born in the province of Manitoba, Canada, Loreena moved to Stratford, Ontario, Canada in 1981, where she still resides. She has acted and sung in, and composed music for, Stratford Festival of Canada productions ranging from The Tempest (1982) to The Merchant Of Venice (2001).

Her recording career began in 1985 with the album Elemental. In the fledgling years of her label Quinlan Road, Loreena ran its operations from her kitchen table, selling recordings by mail order and producing her own concert tours across the country. Quinlan Road’s catalogue is currently distributed around the world by The Verve Music Group (US), Universal Music (Canada and other territories including Italy and Spain) and a number of independents including Keltia Music (France) and SPV (Germany).

Loreena continues to manage her career from her Stratford base. An active member of her community, she has founded and oversees important charitable undertakings in the fields of water safety and family/childhood support services. [source: Lorrena’s Facebook]

SHARE the short-link to this page with friends: http://bit.ly/Loreena-Chicago