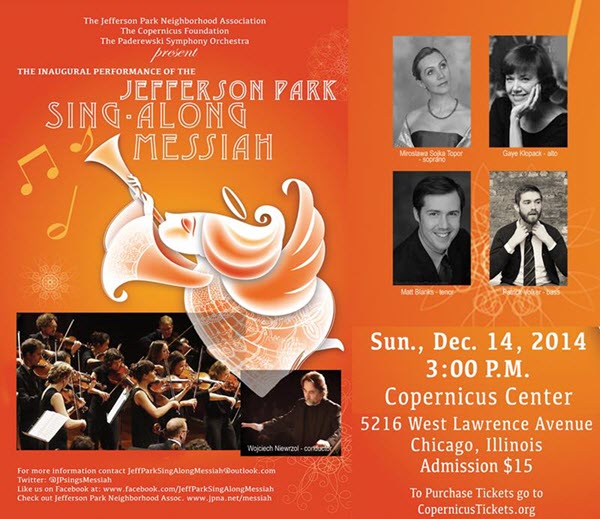 The Jefferson Park Neighborhood Association, the Copernicus Foundation, and the Paderewski Symphony Orchestra are proud to present the inaugural performance of the Jefferson Park Sing-Along Messiah. We are bringing this popular event to Chicago’s northwest side so that all of Chicagoland can see what artistic talent we have in our neighborhood.

With four outstanding soloists, we will be performing the Christmas portion of George Frideric Handel’s famous oratorio The Messiah. The audience will sing all choruses, ending with the stirring Hallelujah chorus.

The auditorium of the beautiful Copernicus Center will be divided by voice: soprano, alto, tenor, bass. Non-singers are welcome too, and can sit with family and friends.

To make this the most musical experience possible, we will be offering rehearsal sessions prior to the concert so that those who are unfamiliar with the music will have a chance to learn it. Vocal scores will be available for sale on the day of the event or you can bring your own.

“It’s not very often that one gets a chance to sing out with full voice and be accompanied by an orchestra,” “It’s a hit every year .”
For many, the experience can be an emotional one.
“It can bring tears, it’s such a beautiful piece of work,” “It gives me goose bumps,”

The History of Handel’s Messiah
Composed by Handel in 1741, the “Messiah” is sung around the world during the Christmas season.  Originally intended as an Easter oratorio, Handel’s Messiah tells the story of Jesus’ birth and life. Over the years, however, it has become more popularly associated with Christmas. The “do-it-yourself” idea was born at a small church in rural England more than 30 years ago and was first staged in Chicago in 1976.

The Polish-American Symphony Orchestra (PASO) debuted at the auditorium of the Washington Public Library in October 1997 with a concert featuring Polish and American music (Moniuszko, Copland) and was received with great enthusiasm by a multi-ethnic public.
In 1999 the orchestra was named after one of the greatest artists who served both the Polish and American nations: Ignacy Jan Paderewski – a pianist, composer, diplomat, and the first Prime Minister of a reborn Poland. Thanks to the support of the Polish-American and American communities, the organization has grown from a small chamber ensemble to a large cultural organization with permanent staff, over 40 volunteers, its own Choir and an Academy of Music for children and youth. PaSO has organized events involving over 300 artists, and performances in Chicago’s most illustrious concert halls – including the Orchestra Hall at Symphony Center, the Rosemont Theatre, Harris Theatre and Millennium Park.

The audience it reaches has grown from barely 400 in 1996, to over 14,000 in its record 2009-2010 season. During these years the orchestra has performed 198 symphony and chamber music concerts for over 170,000 listeners. Its average season consists of 6 programs featuring different kinds of music: from chamber to big symphony orchestra and opera, from early to contemporary pieces, including Polish, American and World music.

In 2010 PaSO become the Orchestra in residence at the Copernicus Center. Thanks to partnership with the Copernicus Foundation, PaSO presented a number of complex, multimedia projects (e.o. Pan Tadeusz, Vienna Night, Carnival in Venice, Dancing Chopin) and developed new forms: Theatre of Song and Family Festival “A Sunday in a World of Art”. Our orchestra plays an important part in many community events: “The Magic of Chritmas” Festival, TOP Festival, Majόwka and others.

The Copernicus Center is conveniently located by the Jefferson Park Blue Line & Metra stops.  Click HERE for all directions and parking.

See below to jump to a track: