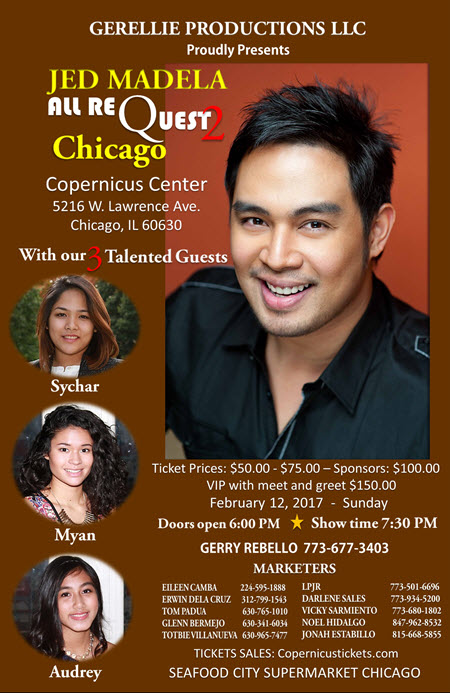 Jed Madela is a Filipino Artist and TV host. He became the first Filipino to win the WCOPA World Grand Champion Title, and is known with a uniquely wide vocal range. Jed Madela will be back in Chicago on February 12, 2017 at 7:30 pm, at the Copernicus Center. Jed Madela – All Requests 2 Chicago is a repeat concert from his successful show in Chicago last July.

The show is produced and directed by Gerry Rebello.

“Jed Madela possesses one of the most clean, clear and the most powerful voice that any man can humanly possess” – Lea Salonga

Often referred to as “The Voice” and “The Singer’s Singer” by the media, Jed Madela is one of the best male singers the country has ever produced. Jed made waves during the 2005 World Championships of the Performing Arts (WCOPA) in Hollywood California when he single-handedly won all major industry awards, 6 gold medals for all 6 categories he joined, the Champion Vocalist World Star Trophy and the most coveted and ultimate title “Grand Champion Performer of the World”, the first Filipino to win the title. He bested over 3,000 contestants from 52 countries to win the grand prize.

Jed has released 7 albums to date. Debut album “I’ll Be Around” includes the radio smash “Let Me Love You (From The Bottom Of My Heart)”.

His second album “Songs Rediscovered” was certified DOUBLE PLATINUM, while his third album “Only Human” went GOLD.  He also released a Christmas CD “The Voice Of Christmas”.

He is now a mainstay of ABS CBN’s Sunday noontime show ASAP.

Jed is currently enjoying sell-out concerts in the Philippines and around the world.

World Champion Jed Madela released “Songs Rediscovered 2: The Ultimate OPM Playlist”, the perfect follow-up to the Double Platinum-certified “Songs Rediscovered”. The new CD is a distinguished collection of timeless OPM songs from the ’80s and ’90s sung to perfection by a voice that is once heard, never forgotten.

“The Classics Album” & “Breathe Again” followed.  His latest album under Star Records is called ALL ORIGINAL… a 10 track album which comprises of fresh original tracks… one of which was written by Jed himself.  [Source: Facebook About page]