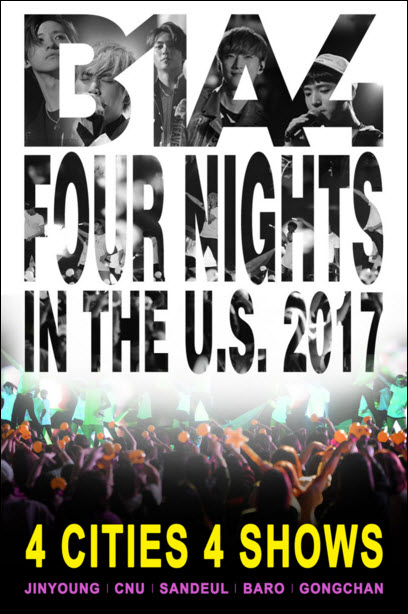 B1A4 is coming to the US for a four show, Four City Tour to dedicate four special nights to all the U.S. BANAs and other KPOP fans alike! Jinyoung, CNU, Sandeul, Baro, and Gongchan will perform at the Copernicus Center on February 17th.

Throughout the years, since their debut, the group has showcased various concepts that really compliment the wide range of charms that each member has in store. From performing live on stage to even acting on the big screen, their wide array of talents has caught everyone by surprise time and time again.

2017 B1A4 “FOUR NIGHTS” in US Tour will indeed be one of these moments, where the boys will show how they have matured in the last year, and put their full energy into four special nights for both U.S. BANAs and other K-Pop fans!

The tour will kick off one of many great things to come in the year of 2017!  Don’t miss your chance for the magical nights that B1A4 has in store for you!

For more information about the tour, please call the event’s producer, Powerhouse.