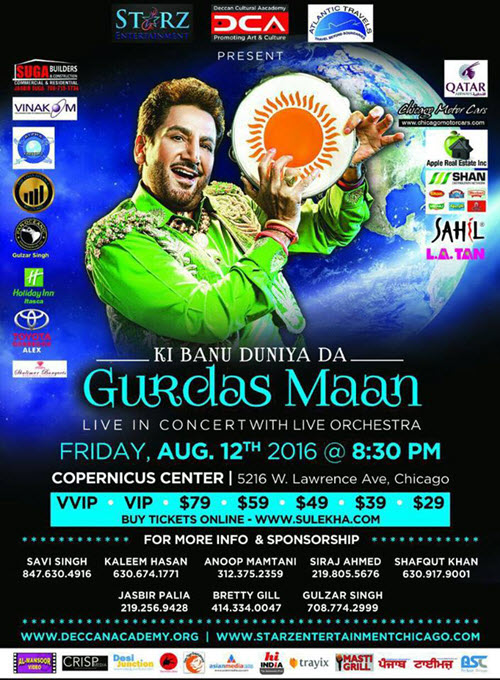 He is a singer who can sing non-stop for 4 hours. He sings 100% live with musicians with no technological assistance for music. He is a songwriter, choreographer and actor. Above all he is a genuine human being who reached the zenith of ‘respect’ and through music he touched millions in the world. He is our legendary ‘Gurdas Maan’. Get ready to experience a concert of a lifetime – an original, 100% live, never seen before concert this August 12th. You won’t just bring home an experience of an evening…it will ring your ear throughout your life.

Gurdas Maan has recorded 34 albums, written over 305 songs, worked with legends like Jagjit Singh, now connected to MTV Coke Studio India. He shot to fame with his hit song ‘Dil Da Mamla Hai’. Soon after came ‘Mamla Gadbad Hai’ and ‘Chhalla’. Very recently ‘Ki Banu Duniya Da’. In 2013 he announced the launch of his YouTube channel to stay connected with his fans via video blogs and old as well as new music videos. Gurdas Maan received an honorary degree of Doctor of Music from the University of Wolverhampton in 2010. Most noted films of him are Waris Shah-Ishq Da Waaris and Shaheed-E-Mohabbat.

This particular show is completely different from what he has done before, the promoters say. Don’t miss meeting this legend on Aug 12th, brought to you by successful Cardiologist, Dr. Siraj Ahmed of DCA (Deccan Cultural Academy), Businessman Mr. Savi Singh of Starz Entertainment and Businessman Anoop Mamtani of Atlantic Travels. DCA hosted many legends, such as, Rahat Fateh Ali Khan and Amjad Sabri. Starz Entertainment and Atlantic Travels have hosted Atif Aslam, Farhan Akhtar recently. Sponsored by Chicago Motor Cars, Qatar Airways, Holiday Inn and many other businesses, this is a unique and original event with mixture of folk and sufi.