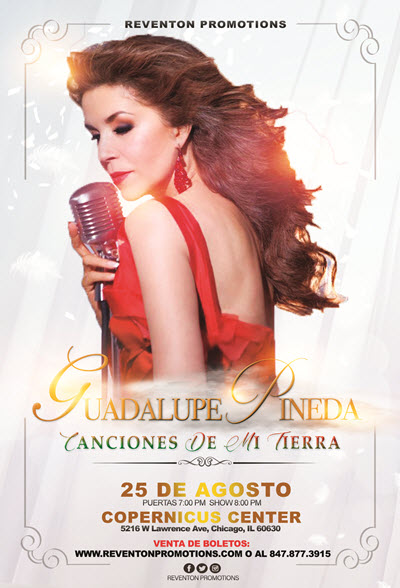 Winner of the Latin Grammy Lifetime Achievement Award and Latin Grammy Nominee, she has released more than 30 albums during her career covering various styles of music with sales over 10 million copies.

In 1984, she recorded her breakthrough hit “Yolanda”, also known as “Te Amo”, composed by Pablo Milanes, selling more than 1.5 million copies. She primarily sings in Spanish but has also sung in French, Italian, English and Hebrew, she has been called the “Queen of Bolero” but has also sung ballads, mariachi, tango, ranchera and opera. Pineda has performed all over Mexico and in various countries in Europe and the Americas. She’s been worthy of innumerable recognitions, awards and special mentions from the critics, proving through 44 years of career that quality and purity of music are not opposed to the popular approval.

She has received Gold and Platinum certifications with some of her albums due to high sales, including “20 Boleros de Siempre” (1990), “Costumbres” (1991) and a Double Platinum certification for her album “Arias de Opera” (2002). Her voice has transcended Mexican frontiers. We will have her here in Chicago this coming August 25th 2018 to delight us with all her music. Mariachi heritage will be part of this great concert.