Sorry, this event has been cancelled by the producers.  Tickets will be refunded.  Please contact the producer with any questions. 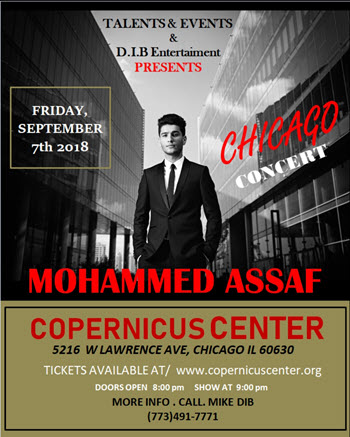 Mohammed Jabr Assaf was born on 1, September 1989 in Misrata Libya. He lived there until he was 4 years old, when his parents moved back to Gaza, he grew up in Khan Younis refugee camp to a middle class couple where he attended UNRWA elementary school.  He began singing at age 5 and was discovered by the Palestinian composer Jamal Al Najjar when he was 11 years old.

Mohammed’s meeting with the composer Yasser Omar was a turning point in his musical career, his music helped shape Assaf’s artistic character, composing a number of popular songs for Assaf, like “Ya wleedy”, “Wallah al Zaman Dawar”.

In the summer of 2012, Mohammed Assaf attended the first auditions of Arab idol season 2 in Cairo, Egypt, he had to overcome many obstacles in order to attend the auditions. He had to jump the fence in order to get into the location, once there, he found all the audition numbers gone. Assaf began singing, a fellow Palestinian hopeful heard him and asked him about his story, and he offered his audition number to Mohammed.  His journey in Arab Idol season 2, was a historical one. His amazing voice combined with his stage presence and charisma helped make him one of the most popular contestants on the show, and made the program one of the highest rated programs on MBC and in the Arab world. He performed songs from all kinds of musical genres, from old classics to Jabali songs to pop hits, and proved his versatility and unprecedented talent. On 22, June 2013, Mohammed Assaf was won the Arab Idol contest, and that triggered a wave of celebration throughout Palestine and the Arab world.

Since winning Arab Idol, Mohammed Assaf have been touring the world to a sold out concerts in the Arab World, USA, and Europe. On June 10th 2014, Assaf sang his World Cup single #ASSAF360 in front of the FIFA congress 64 in Sao Paulo Brazil to a global audience. His debut Album titled “ASSAF ” was released on October 2014 and includes 11 tracks and two bonus tracks on the digital release. The Album was chosen by iTunes among the best albums of 2014 and claimed the number one spot at Virgin megastore in the Arab World.