The Anthony Kawalkowski Orchestra presents The Love and Peace of Christmas

See the Picture Gallery from this Event at THIS LINK. 🙂 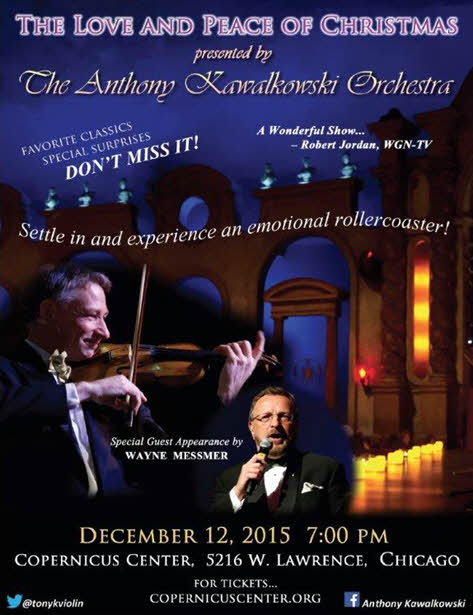 Led by violinist, Anthony Kawalkowski, the full orchestra and vocalists will feature Christmas favorites including “O Holy Night”, “Sleigh Ride”, “The Hallelujah Chorus”, and many more.  Our Christmas concert includes many elements and surprises for both young and old. Enjoy the fun with the entire family during this third annual AKO Christmas Show!  It will be a memorable experience that you will want to make a tradition.

The Anthony Kawalkowski Orchestra (AKO) is comprised of some of Chicago’s finest and “in demand” musicians and vocalists, featuring full string and swinging brass sections, rhythm section and vocals. Our family of musicians truly love bringing the gift of great music to you and are dedicated to creating memorable performances. While the AKO is home, each have their own credentials (too long to list) and chances are, you may have heard and seen them in other musical endeavors in and around Chicago. Each brings their own unique talents to the stage, to create the “AKO Sound”. From Swing to Pop to Classics to Waltzes, with Elvis and some Rat Pack thrown in for good measure, you are guaranteed an evening of musical delights!  AKO Orchestra WEBSITE  ~~  AKO Orchestra FACEBOOK

Anthony “Tony” Kawalkowski is a Chicago native, violinist and orchestra leader. Tony’s energy on stage and off is contagious. His lifelong dream led him to form his own company – From the Heart Musical Productions, Inc. In his latest endeavor, Tony is excited to share the AKO Christmas Show – The Love and Peace of Christmas.

Tony was named after his uncle, who was also a renowned musician and his first teacher. He also studied with Herb Miska, from The Wayne King Orchestra, and George Perlman at the American Conservatory of Music. Tony has played for national and international dignitaries such as Pope John Paul II, Cardinal Bernadine, Cardinal Francis George, Lech Kaczynski (former President of Poland), Michel Legrand, Henry Mancini, Arnold Palmer and Arnold Schwarzenegger.  Tony has released 2 albums, Playing from the Heart and Timeless Romance and has appeared on local radio and television programs. TWITTER:  @tonykviolin

Messmer’s voice remains most associated with the singing of the National Anthem. He has held a professional association with the Chicago Cubs since 1985.  Additionally, his spirited rendition of the United States and Canadian National Anthems prior to the NHL All-Star game at Chicago Stadium in January 1991 was replayed on every major network newscast across the country and still appears near the top of many lists, mentioned among the most memorable National Anthem performances.

Chicago born and raised, this wildly versatile singer, guitarist and songwriter has been entertaining audiences and bringing music lovers to their feet – and the dance floor – for over 20 years. Steve’s first gig was his 6th grade variety show, where he sang and played one of his own songs and Raindrops Keep Falling On My Head. “When I was a kid I got a guitar, bought Beatles Records, watched Elvis movies and listened to my Dad play Sinatra on his old 78’s. I guess I was taking it all in!”

In addition to performing with the AKO, Steve has been thrilling audiences with his premier tribute SOUNDS OF SINATRA, since ’95. An exciting celebration of the legendary music of Ol’ Blue Eyes! With a rich baritone voice, Sinatra phrasing, and plenty of presence and charisma, you simply wont believe your ears. Stevie also loves surprising audiences with his dead-on Neil Diamond & Elvis too.

Stevie’s performances have been enjoyed in night clubs, restaurants, parties, weddings, concerts in the parks and area festivals, including; Chicago’s Taste of Polonia, Chicago Botanical Gardens, Navy Pier, Oak Brook Summer Concerts, Schaumburg Summer Breeze Concerts, Buffalo Grove Days, Palatine’s 4th of July and many more. Most recently, Chicago’s Copernicus Center with the Anthony Kawalkowsi Orchestra. As a solo artist and with acclaimed bands & orchestras, he has headlined and opened for several national acts, including one of his two all time favorites; Jimmy Buffett.

Gayle has been teaching and singing professionally for over 25 years. As a performer, she has had the honor of sharing the stage with Patti Austin, New York Voices, John Pizzarelli, and Clark Terry, among others. On the international circuit, her singing has taken her to such places as the Montreux Jazz Festival in Switzerland, North Sea Jazz Festival in The Netherlands, Ontario Jazz Festival, Spain, Portugal, Ireland, Scotland, Germany, France, as well as New York City. Gayle is also the recipient of the prestigious Downbeat Award for Best Jazz Vocalist.

Equally at home on the operatic stage or in concert repertoire, American lyric soprano Susan Nelson has been praised by critics for her “full, powerful voice – agile and pliant” as well as her interpretations, called both “sensitive and moving” and “full of life and vigor.” She showcases versatility and vocal beauty in repertoire from Bach and Mozart to verismo and contemporary opera, as well as light opera and popular music.  In the 2015-2016 season, Susan returns to Salt Creek Chamber Orchestra to sing Pamina in Die Zauberflote, will sing Josephine in HMS Pinafore with the Savoyaires, Messe in H Moll with St. Luke Church in Chicago, Rossini’s Petite Messe Solennelle with Elgin Master Chorale, The Love and Peace of Christmas with the Anthony Kawalkowski Orchestra, four cantatas (including BWV 199 – Mein Herz schwimmt in Blut) and the Weihnachts Oratorium with Grace Lutheran Church’s Bach Cantata Vespers, Donna Elvira in Don Giovanni with Floating Opera Company, Faure’s Requiem with Skokie Valley Symphony Orchestra, and a concert with the Rock Valley College Orchestra. https://susannelsonsoprano.wordpress.com/

John Hacker, an alum of the University of Illinois, has sung in many venues in the Chicago area.  He has performed roles with Bowen Park Opera, Dupage Opera Theater, Light Opera Works and Drury Lane Oakbrook.  Chorus engagements have included performances with both Chicago Opera Theater and Chicago’s Lyric Opera.  He has directed choirs at Barrington High School where he directed musical productions of Wizard of Oz, Camelot and Thoroughly Modern Millie; is an Adjunct Professor of Voice at Trinity International University; maintains a private voice studio in the Northwest Suburbs of Chicago; has worked as the musical director for Schaumburg on Stage, a production company for young people; and serves in his church’s music ministry. A most recent project has been the recording and release of his CD “Until Then,” a collection of hymns and songs of faith.  Link to more Information

Kristina Pappademos is a past member of the Chicago Symphony Chorus and currently sings with the Grant Park Music Festival. She has appeared with Light Opera Works and various local opera companies in the roles of Carmen, Orlofsky, (Die Fledermaus) Suzuki, (Madama Butterfly) and numerous zarzuelas in staged and concert performances. She toured the US and the Netherlands in a contemporary dance piece, music by Louis Andreissen. She teaches piano and singing and is a soloist with the choir of Christ Church, Winnetka, with whom she tours the UK.  Link to more information

Matt Blanks (formerly Matthew Dingels) is making a name for himself as an exceptional tenor. Credits include: Edgardo in Lucia di Lammermoor and Almaviva in Il barbiere di Siviglia with Main Street Opera, Ferrando in Cosí fan tutte with Petite Opera, Fenton inFalstaff with Kor Productions, Comte Ory in Le Comte Ory with Katydid Productions, Henrik in A Little Night Music with St. Petersburg Opera, and Charlie (cover) in Brigadoonwith Music by the Lake.  He has sung with such groups as Washington Bach Consort, Chantry, and Concert Artists of Baltimore. During this time, Mr. Dingels performed his first Elijah and Mozart Requiems as tenor soloist, along with a slew of other concert works. Following this, Mr. Blanks participated in residentartist programs at Tri-Cities Opera, Indianapolis Opera, Sarasota Opera, and Chicago Opera Theater.

Upcoming engagements include recitalist for Third Eye Theatre Ensemble, and Kaspar in Amahl and the Night Visitors with Milwaukee Southwest Suburban Symphony.  Link to more information

Encore is directed by Mitchel Young; a 2013 Grammy Award nominee for Music Education. Mr. Young is currently in his 15th year teaching music at the recently recognized National Blue Ribbon School located in Chicago’s Lakeview neighborhood. Saint Andrew offers general music classes to all students incorporating Mac based technology into the curriculum. The assistant director of Encore is Aimee Milhizer.

Encore is an after school performing arts program allowing students the opportunity to express themselves creatively through singing, acting, and dancing. In addition to performing within the Saint Andrew community, some past performances include: Children’s Chorus at the Royal George Theatre’s production of Joseph and the Amazing Technicolor Dreamcoat, and singing the National Anthem at Wrigley Field, U.S. Cellular Field, Loyola, Northwestern and DePaul Universities. One of the most memorable performances was singing with Oscar nominated actor Ryan Gosling and his Band “Dead Man’s Bones.”  Link to more information