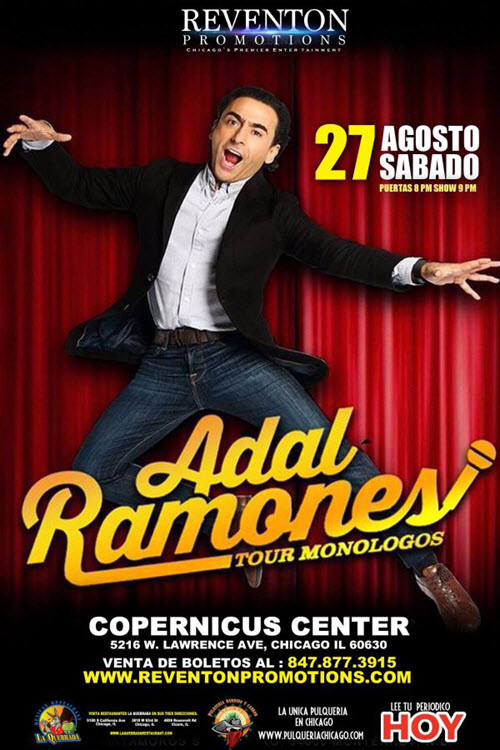 Adal Romones [ Adalberto Javier Ramones Martínez ] is a Mexican television show host and comedian who is known for his comments on Mexican and international social life. Ramones was the host of a popular Mexican television show, Otro Rollo, which was produced by Televisa and televised in 53 other countries, including the United States, where the show was transmitted by Univision.

In February 2003, Ramones suffered burns to several parts of his body as he was shooting his show, requiring hospitalization. He had to wear glasses for some time after this.

On July 30 of that year, American pop star Britney Spears sang at his show, and on September of that year, he led the La pesera del amor contest, where a man chose among a number of women to pick a future wife. Ramones promised the man and the contest winner that the show would pay for their wedding and he would broadcast it live. La pesera del amor was later kept as a regular feature and more contestants participated for the chance to meet someone.

In November 2003, Sylvester Stallone became the second American superstar to participate in the show that year. Other international stars that have appeared in the show through the years are: Ricky Martin, t.A.T.u., Will Smith (three times), Sylvester Stalone, Arnold Schwarzenegger, Kevin James, Sylvia Saint, Diego Maradona, Christina Aguilera, David Copperfield, Drew Barrymore, Cameron Díaz, Lucy Liu, Chris Rock, Chayanne, John Leguizamo, N*SYNC, The Backstreet Boys, Gloria Gaynor, Shakira and The Rock. Worthy of note, although Paris Hilton was scheduled to appear on the show, she did not show up, leaving him to wait live in front of millions of viewers.

Adal Romones is also an actor and producer.  His past works include Cantinflas (2014), and Bailando por un sueño (2005).