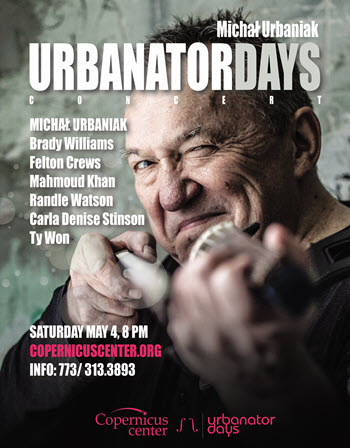 Michal Urbaniak with bring the Urbanator Days Project to the Copernicus Center in May 2019. Please join us for one of the most innovative music events in the world!

Michał Urbaniak is a jazz musician who plays violin, lyricon, and saxophone. Never shying away from experimentation, his trademark style blends folk, rhythm and blues, hip-hop with symphonic music and jazz.

Urbanator Days Project debuted in 1994 with the release of the self-titled record. With guest performances by Herbie Hancock, Michael Brecker and Marcus Miller it became a milestone in the evolution of contemporary jazz music. Urbanator Days is one of the most innovative music events in the world.

Please join us in this unique experience with personalities of international music scene. This is truly a once in a lifetime opportunity!

“As a boy prodigy violinist, I played many recitals and concerts with philharmonic orchestras. I took part in competitions for adults and was awarded a scholarship to study in Moscow with the famous David Ojstrach. At the same time I fell in love with American Jazz along with it’s culture and a passion for this other musical life began to emerge. One might say that after I began to play Jazz I felt as though a second musical identity came to being. Dr. Jekyll was the straight A student in music school practicing intensely everyday until the afternoon. After which Mr. Hyde would appear experimenting with the new sound of Jazz at local clubs and bars. I dreamed of a time in my life when these two musical identities of mine could be combined somehow.
However, much time passed before my dream could become a reality. I made a promise to my mother that I would not take that scholarship for violin in Moscow. I put the violin aside altogether and began traveling the world as a young saxophonist. I left Poland for good knowing that playing with promising young musicians who played real American Jazz there is more to learn than anywhere in Europe, at least at that time. So I finally came to live in the New York I dreamed of for years and the victory was sweet.
Eight years after I thought I had given up the violin for good I dusted it off and arduously began to teach it to play Jazz as I had done with the saxophone. As a jazz violinist I started a band in which I began connecting the music of my youth and all my experiences of jazz, rock and funk. I was never indifferent to what I heard around me and that is how Fusion came to exist. The experimentation of many musical elements and seeing how they can be used to compliment and ignite each other was fascinating. In New York I discovered a group of incredible young musicians from Jamaica Queens whose innocence, passion, professionalism and profound precision enabled this experimentation to take place. After playing Fusion for a while my music began to evolve further into Acid Jazz; combining the melodic soul of Jazz with the then very fresh beats of Hip hop.
Shortly after the release of Urbanator I felt the need to introduce my classical roots to the new sound of Hip Hop. An official meeting of both loves was due. So, on 27th of January 1995, for the first time in the history of music, a rapper preformed with a philharmonic orchestra. That day I had proved to myself that which I knew always to be true: God created music and people divided it into categories.”    – Michal Urbaniak

Michal Urbaniak and the Copernicus Foundation