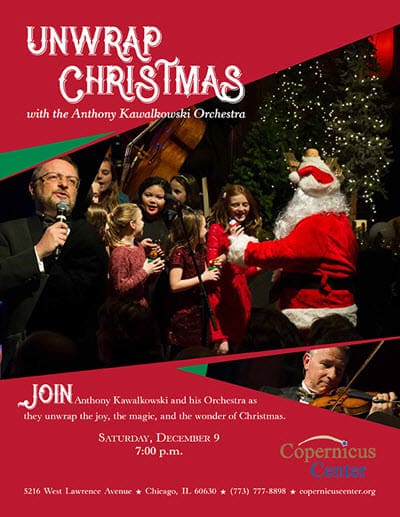 “ Unwrap Christmas ” is a fun, heartwarming, musical production that celebrates the spirit of Christmas in all of us. Many audience members have told us, after attending our previous shows, that they were making our show a part of their own Christmas tradition because it always puts them in the Christmas spirit.

This year’s concert features a 38-piece orchestra including 7 vocalists and a 50-member children’s choir. The music is accompanied by a backdrop of compelling visuals and video, and several dramatic presentations, including a reenactment of the Nativity scene.

There will also be vigorous audience participation, and several surprises as well – one of them from the North Pole!

We invite you to help us Unwrap Christmas this year and join us in making our show a Christmas tradition for your family and friends.

The Anthony Kawalkowski Orchestra (AKO) comprises some of Chicago’s finest and “in-demand” musicians and vocalists, featuring full string and swinging brass sections, a rhythm section, and vocals. Our family of musicians truly loves bringing the gift of great music to you. We are dedicated to creating memorable performances and while the AKO is home, we each have our own credentials (too long to list).

Chances are, you may have heard and seen some of them at other musical presentations in and around Chicago. Each member brings his or her own unique talents to the stage, creating the “AKO Sound.” From swing to pop, from classical to waltzes, and with a bit of Elvis and even some Rat Pack thrown in for good measure, you are guaranteed an evening of wholesome musical delights!

Anthony “Tony” Kawalkowski is a Chicago native, renowned violinist and orchestra leader. Tony’s energy on stage and off is contagious. His lifelong dream led him to form his own company – From the Heart Musical Productions, Inc. In 2013, Tony’s AKO Christmas Show – The Love and Peace of Christmas – became a new holiday tradition for AKO fans, gaining critical acclaim and national coverage with appearances by our military and Chicago’s own Wayne Messmer!

Tony was named after his uncle, who was also a renowned musician and his first teacher. He also studied with Herb Miska, concertmaster from The Wayne King Orchestra, and George Perlman at the American Conservatory of Music. Tony has played for national and international dignitaries such as Pope John Paul II, Cardinal Bernadine, Cardinal Francis George, Lech Kaczynski (former President of Poland), Michel Legrand, Jenny Mancini, Arnold Palmer, and Arnold Schwarzenegger. Tony has released 2 albums, “Playing from the Heart” and “Timeless Romance” and has appeared on local radio and television programs.         See Tony’s Facebook HERE

Messmer’s voice remains most associated with the singing of the National Anthem. He has held a professional association with the Chicago Cubs since 1985.  Additionally, his spirited rendition of the United States and Canadian National Anthems prior to the NHL All-Star game at Chicago Stadium in January 1991 was replayed on every major network newscast across the country and still appears near the top of many lists, mentioned among the most memorable National Anthem performances.

Encore is directed by Mitchel Young; a 2013 Grammy Award nominee for Music Education. Mr. Young is currently in his 17th year teaching music at the recently recognized National Blue Ribbon School located in Chicago’s Lakeview neighborhood. Saint Andrew offers general music classes to all students incorporating Mac based technology into the curriculum. The assistant director of Encore is Aimee Milhizer.

Encore is an after school performing arts program allowing students the opportunity to express themselves creatively through singing, acting, and dancing. In addition to performing within the Saint Andrew community, some past performances include: Children’s Chorus at the Royal George Theatre’s production of Joseph and the Amazing Technicolor Dreamcoat, and singing the National Anthem at Wrigley Field, U.S. Cellular Field, Loyola, Northwestern and DePaul Universities. One of the most memorable performances was singing with Oscar nominated actor Ryan Gosling and his Band “Dead Man’s Bones.”  Learn more about the school HERE.