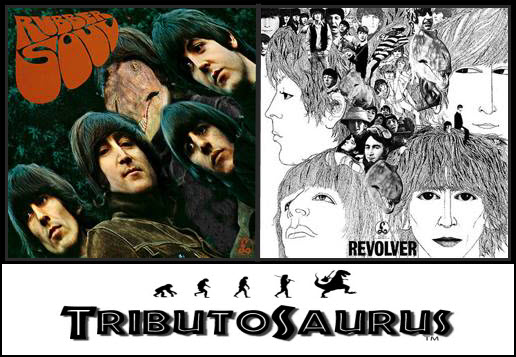 Rubber Soul and Revolver
A special early evening, all ages show!
Both albums performed in their entirety, with meticulous, faithful re-creations of all the original arrangements on  Sunday April 12th, at 5 PM.

The audacious Tributosaurus Beatles project, to perform all of their recorded songs from start to finish, concluded last fall with a performance of Let It Be, and the best of the orchestral compositions. Now, they have the freedom to craft special shows, spanning the entire catalog. The first choice is a special early evening, all ages show, featuring the great back to back albums, Rubber Soul and Revolver.

On Rubber Soul, the songwriting of John and Paul reaches full bloom. It’s 1965, and for the first time the band records an album in one continuous period of time. The result is a cohesive collection of brilliant songs influenced by R&B, pop, and soul. “I’ve Just Seen A Face.” “Michelle.” “Norwegian Wood.” “In My Life.” Perfection.
Remember, these are the UK releases, so the songs may not be on the albums you think, and the order might be a little different than you remember – but they’re all there.

Revolver was an unparalleled musical achievement – it heralded the beginning of the psychedelic era, and was much more electric than Rubber Soul. It was a clear defined line in the Beatles development, and marked another paradigm shift that they introduced into pop music in general. This is when things started to get a little trickier for Tributosaurus to recreate, with more interesting musical ensembles and instruments appearing. A full horn section for “Got To Get You Into My Life.” A sitar and Indian percussion for “Love You To.” Strings for “Eleanor Rigby.” An entire closet full of weird stuff from Abbey Road studios for “Yellow Submarine.”

The expanse of the Tributosaurus Beatles series requires a special venue, and it returns to the perfect place. The Copernicus Center Theater was the first movie palace in Chicago designed for talking pictures, and it has been restored to its’ original condition and outfitted for live performance. It is incredibly convenient – located just a block from the Kennedy on Lawrence, and 2 blocks from Metra and Blue Line stops at Jefferson Park Terminal. From the starry sky ceiling to the marble clad lobbies, everything about this theater impresses, and the acoustics are fantastic too.

Tickets go on sale Friday March 7th, at 10 AM, at Copernicus, Tributosaurus.com and CopernicusCenter.org, as well as at WXRT.com. Tickets are ONLY available online (no box office sales). The seating is assigned, so you’ll want to get yours ordered as soon as you can to reserve the section you want – and bring your kids to experience this – it is an ALL AGES show.