This event has moved to the Vic Theatre. It will be on the same date 7/24.

Tickets bought through this website will be honored at the VIC Theatre. 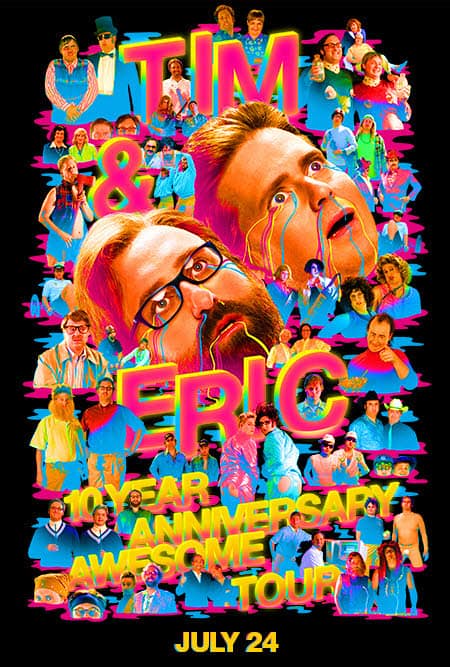 The comedy duo of Tim Heidecker and Eric Wareheim have developed such a distinct and creative style, it’s no surprise that writers and advertising agencies across the country have essentially named a style after their bizarre brand of humor. In addition to Tim and Eric Awesome Show, Great Job!, for which they are best known, and their first feature film, Tim and Eric’s Billion Dollar Movie, they run Abso Lutely Productions, a production team behind some of today’s most exciting and original television programs including The Eric Andre Show, Nathan For You, Tim and Eric’s Bedtime Stories, Check It Out w/ Dr. Steve Brule, W/ Bob & David, Comedy Bang! Bang!, and Decker, amongst others, plus web series “On Cinema.” Additionally, Eric directed four episodes of the first season of Netflix’s Emmy Award winning show, Master of None, of which he also stars alongside the show’s creator and lead Aziz Ansari, and is a renowned director of music videos for artists including MGMT, Major Lazer, Beach House, Charli XCX, Flying Lotus and more. Tim has acted in Eastbound & Down, The Comedy, Bridesmaids, Portlandia, and other films and television programs. He is also a musician who released his first solo album last year, and is known for writing and releasing music about the current political landscape.

In honor of the momentous 10 year anniversary of “Tim and Eric Awesome Show, Great Job!,” Tim and Eric are hitting the road this summer for a special “10 Year Anniversary Awesome Tour!” In the words of Tim and Eric, “It’s been 10 years. We are heading out to see our chips across the USA and celebrate this incredible decade of Tim and Eric with a number of new spoofs and goofs, riffs and bits, songs and dances and hope to create memories to last a lifetime.”