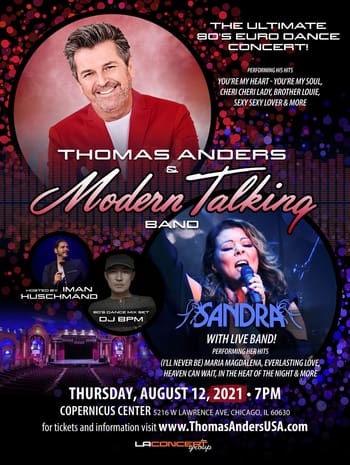 An evening of Euro Dance Music Entertainment featuring Thomas Anders & Sandra, both with live bands!  Three hours of high energy music, featuring The Gentleman Of Music – Thomas Anders (original magnetic voice of Modern Talking) accompanied by the Modern Talking Band. Sandra, accompanied by her own band, will perform her ultimate hits of the 80’s such as Maria Magdalena, In the Heat of the Night, Everlasting Love & more… Enjoy opening entertainment by DJ BPM spinning the best of 80’s hits as soon as the doors open. So put your dancing shoes on and come on over for this historic night!

Thomas as born on 1 March 1963 and is one of the few German stars who can be said to have made both a national and international impact on music history. During his time with Modern Talking, he enjoyed countless chart successes that spread his fame to almost every corner of the earth. “You’re my heart, you’re my soul”, for example, reached number 1 in 81 countries. Worldwide CD sales of Modern Talking and of Thomas Anders’ solo works have now topped the 125 million mark. Thomas Anders has received more than 420 gold and platinum discs or CD’s and numerous awards to mark his artistic achievements.

Sandra was born in the German town of Saarbrücken, close to the French border. Sandra won international success in 1985 with a song “Maria Magdalena”, which topped the charts in 21 countries worldwide and reached top 10 in further five. Her first album, The Long Play (1985), reached number 12 in her home country of Germany and was a top 10 success in Scandinavia.The follow-up single, “In The Heat Of The Night”, continued her international success, reaching number two in Germany and top 10 positions in many European countries. Her other hits include Everlasting Love, Little Girl, The Long Play and many more. Sandra will be accompanied by her live band!

MEET & GREET NOTE →  M&G is at 7 pm.  Details will be emailed with the regular ticket purchase confirmation. Cost $200

◊ → This event is a Theater Rental.