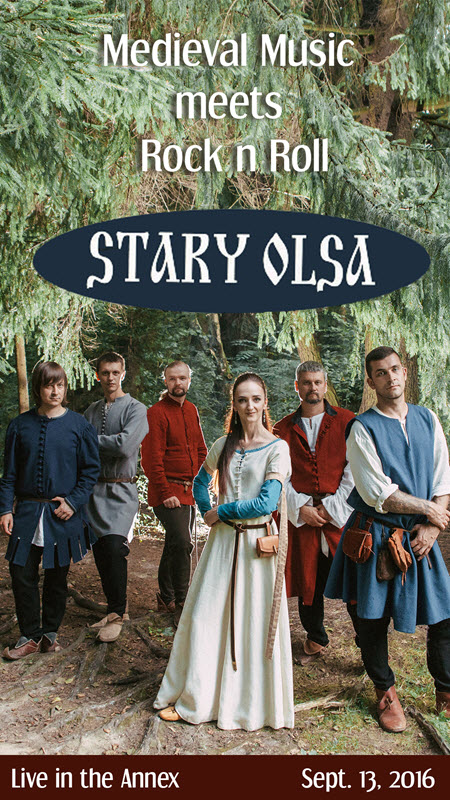 STARY OLSA hails from Minsk, Belarus. Founded in 1999 by its present leader Zmicier Sasnoŭski, it now consists of six musicians. Their goal is to recreate the long lost music and culture of medieval Europe’s greatest nation, the Grand Duchy of Lithuania.

Stary Olsa brings to life the sounds of many forgotten instruments, such as Belarusian bagpipe, gusli, svirel, ocarina, birch bark trumpet, and hudok (Belarusian rebec). These are all made with exacting standards, to look and sound just like the instruments that were played in castles and battlefields, back in the times of knights and chivalry.

Their music comes directly from ancient manuscripts, many of which were lost or hidden during World War II and have only recently returned to the public. The historian-musicians of Stary Olsa have spent many an hour in the libraries of Krakow, transcribing old texts to recover these long-lost songs and poems. They’ve received national awards for their work in restoring these cultural treasures of Belarus, Poland, Ukraine, and the Baltic states.

In 2014, the band tried something fun: they went on a local TV station and covered some modern rock songs on their historic instruments. To everyone’s surprise, the videos went viral! This year, in response to worldwide demand, they are releasing their 13th album, funded completely on Kickstarter–all Medieval Rock covers! Featuring hits from Metallica to the Beatles, the album will be available this summer and can be pre-ordered HERE.

You can catch Stary Olsa on tour in North America this fall. Here’s a list of some of their upcoming shows–check their website or Facebook for the latest schedule!