► By Artist request, ALL attendees must adhere to the following:  Provided Proof of Vaccination OR Negative Test result within 24 hrs. • Masks must be worn while inside the venue.

Chicago welcomes pop stars SPARKS for one live concert at the Copernicus Center on Saturday, March 19th, 2022. Get to hear your favorite band’s favorite band. 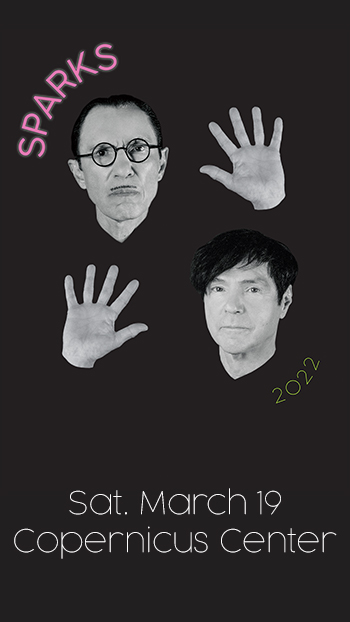 Sparks 2022 tour continues a milestone season for the brothers Mael, following last year’s release of their acclaimed 25th studio album, A STEADY DRIP, DRIP, DRIP, available now via BMG at all music retailers and streaming services. The album – which includes such scintillating singles as “iPhone,” “One For The Ages,” “Lawnmower,” and “Left Out In The Cold,” all of which are joined by official music videos streaming now at YouTube – was met by universal applause around the globe, with Uncut declaring it to be “filled to the brim with the usual abundance of trademark lyrical zingers, tenacious earworm melodies and stylistic zigzags,” adding, “It’s enough to make most of us feel irredeemably lazy and dull-witted.”

“There’s a universe running on a very close parallel to ours where Sparks are the biggest band in the world.”– Variety
“One of the most interesting and influential careers in pop music.” – Los Angeles Times
“Outsider pop musicians of the highest order.” – Time Out

Now entering their sixth decade, Los Angeles-based brothers Ron and Russell Mael remain as innovative, individualistic, and irresistible as ever before. Last month saw the North American release of Focus Features’ The Sparks Brothers, a landmark new documentary from director Edgar Wright (Shaun of the Dead, Hot Fuzz, Baby Driver). Hailed by Rolling Stone as “one of the most entertaining music documentaries in years,” the feature-length film takes  audiences on a musical odyssey through five weird and wonderful decades with Sparks, joined by such celebrity fans as Flea, Björk, Beck, “Weird Al” Yankovic, Neil Gaiman, and more all celebrating the inspiring legacy of Sparks. The Sparks Brothers is now playing in select theatres across North America; for showtimes, please visit www.focusfeatures.com/the-sparks-brothers. Its availability via on-demand will be announced soon.


Annette will arrive in U.S. theatres on Friday, August 6 before streaming in the U.S. exclusively via Amazon Prime Video on Friday, August 20. Annette – which began life as an intended Sparks album but was transformed into a musical film after the Maels met Carax – was heralded this spring with the soundtrack’s “So May We Start,” performed by Sparks, Adam Driver, Marion Cotillard and Simon Helberg and available now at all DSPs and streaming services HERE. A special Annette – Cannes Edition (Selections From The Soundtrack) arrives via Sony Soundtracks/Milan Records this
month on CD, vinyl and digital HERE.