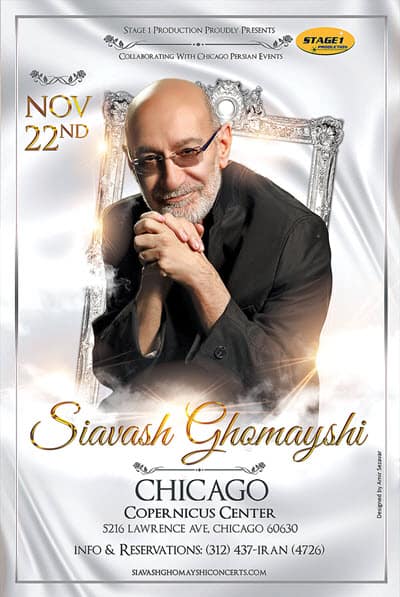 Siavash Ghomayshi (Persian: سیاوش قمیشی ) was born 11 June 1945 in Ahvaz, Iran. He is an Iranian musician, singer and song writer. Siavash studied music in London where he received his Master’s degree from Royal Society of Arts. He lived in Iran until the age of 33. In 1978, Siavash decided to pursue his career in the United States.

In recent years Siavash Ghomayshi has explored electronic music by introducing new elements into his music and the whole Iranian pop music. He is known as the father of trance music in Iran. Among the 17 albums Ghomayshi has recorded and released to date, “Ragbaar”, “Rooz-haye Bi-Khatereh” (“Days with No Memories”), “Bi Sarzamin-tar az Baad” (“More Homeless Than The Wind”), “Taak” (“The Vine”), and last but certainly not the least “Yadegari” (“Memento”) have been among his most successful. Siavash is extremely popular among young generation of Iranians, and in recent years many other singers have attempted to follow Siavash’s style.

Although his albums may be considered largely non-political, he expresses a longing for his home country. Ghomayshi has also had significant involvement in albums released by various Persian singers with their songs and albums, “The Story of Yours, The Story of Mine”, “Setarehaye Sorbi”, “Shab-e-Niloufari”, which have received great reviews. Ghomayshi’s music is considered as Persian-language pop/rock, in contrast to the vocal styling most often associated with adult contemporary singers.