Sarah Geronimo Live ~ THIS 15 ME 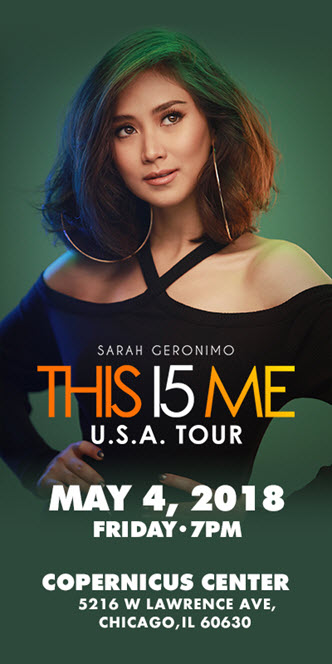 Sarah Geronimo, Pop Star Royalty, descends in Chicago on May 4, 2018 at the Copernicus Center. Joining her in the biggest Filipino concert this Springtime are popular singers Mark Bautista and Sam Concepcion with the G force dancers. The concert promises to  be a big blockbuster show as tickets are selling like hotcakes in all major US cities.

Sarah Geronimo is very much excited for this project as she has been absent in the concert scene for a while as she concentrated on her film, TV and corporate endorsements. She promises new things for this show for her multitude of fans and she is giving much time to prepare for this big anniversary show.

Last July 2017, Geronimo starred in a blockbuster movie Finally Found Someone with John Lloyd Cruz. The movie served as a reunion movie of Sarah Geronimo and John Lloyd Cruz tandem after four years. In January This year, January 2018, Geronimo released the single called “Sandata” and topped the iTunes Philippines chart for 4 consecutive days. The song also landed on Spotify Philippines Viral Chart. The official lyric video of the song was published on Viva Records’ official channel a week later.

Billed as “This 15 Me,” the show celebrates Sarah Geronimo’s 15 years in the showbiz industry with an opening salvo in Manila at the Big Dome on April 14 and will roll out in the US starting at Los Angeles on April 21 at the Los Angeles Theater , Pala ,CA on April 22 at the Pala Casino  , Pittsburg, Ca on April 28, Las Vegas Nevada on April 29 at the Cannery Casino, May 3 in Chicago at the Copernicus Center and New York on May 6 at the Colden Auditorium. Mores details  of the US tour will be found at www.icmanagementinc.com.

The producers of the much talked about  US concert “This15 Me,” International Concert Management or ICM is not a greenhorn on the concert scene having produced  sold out shows like “Pusuan Mo si Vice sa America” in LA featuring Vice Ganda and “Mr and Mrs A” featuring  very much adored showbiz couple Ogie and Regine Alcasid.Rochele Nubla and Lynn Bautista excited claim “This is our first time to do a concert tour for 6 cities after doing very successful stints in LA. We think its time to try our mettle in producing series of concerts with big name stars in other cities too, not just Los Angeles. The concert tour promoters signed a six city contract with entertainment juggernaut Viva Artists Agency  known to have launched the biggest recording, movie TV stars in the Filipino show business.