→ CFD vs CPD Battle of the Bands Charity Fundraiser

See picture gallery at THIS LINK. 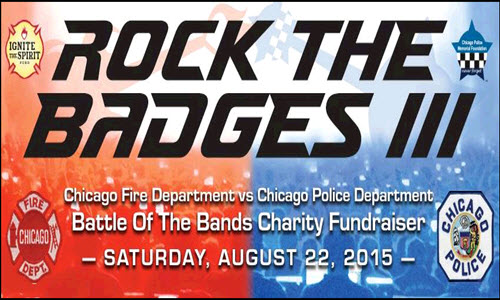 Help raise money for the families of fallen police officers and firefighters while cheering on your favorite police and fire bands as they compete in Chicago’s Third Annual Chicago Fire Department vs Chicago Police Department Battle of the Bands.

ROCK THE BADGES III will take place on the campus of the Copernicus Center with a main stage and 9 amazing musical acts, food tent, beverage tent, and even fun activities for younger rockers. On Saturday, August 22, 2015, we are throwing open the gates at 2:00 PM and rocking until 10:30 PM. It is our expectation that with our earlier start and free admission to persons under 21 years old, this year’s event should be our biggest yet. (Note: Should the weather not be favorable, the event will be held INSIDE the Copernicus Center — come rain or shine, the show will go on!)

This year’s event will be an OUTDOOR EXTRAVAGANZA rocking from the afternoon into the evening. This will be our best event yet!

ALL TICKETS ARE ONLINE NOW AT  →→ → www.RockTheBadges.com

Competing Bands to Be Announced Soon!  However, appearance will be made by It’s About Time, Sami Lin, and NORTHSIDE [ 2014 Rock The Badges Grand Champion ].  A CFD Band will perform immediately before the competition kicks off!

DISTINGUISHED JUDGES TO BE ANNOUNCED!