Robin Trower: The Man. The Guitar. The Legend


The Robin Trower story started in the mid 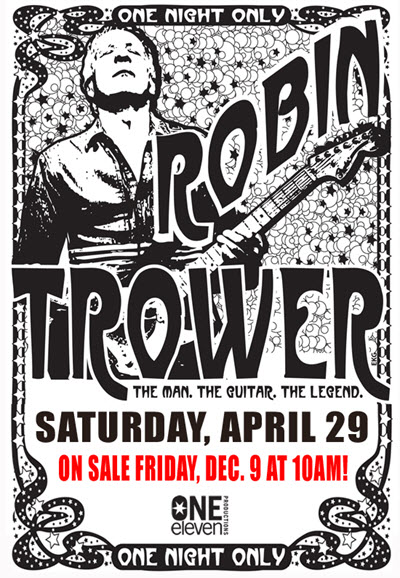 Sixties when he began his recording career in the Southend rhythm and blues band The Paramounts. But the first time Trower pinged on rock’n’roll’s radar was in 1967, with Procol Harum – house band of the Summer of Love. Though he did not play on their mega-hit ‘A Whiter Shade Of Pale’, he completed five albums and many tours with them before breaking away for a solo career in 1971.

Robin admits that ‘the big break for me was Gary Brooker getting me to join Procol. That opened up the whole world. Without that I would never been able to go on and do what I’ve done.’ He rates leaving PH ‘the best career decision I ever made’

Trower modeled his own band on the power-trio blueprint of Cream and Taste, and, of course, the Jimi Hendrix Experience. His atmospheric, effects-laden Stratocastering brought inevitable initial comparisons with Hendrix, but he quickly made his own mark. Robin along with the vocal talents of James Dewar, a hard-living Scot, whose voice will always be associated with the Robin Trower Band proved to be a musical powerhouse.

Robin soon found himself outselling Procol by a considerable factor as he tuned in to the heavier zeitgeist of a new decade, his second album, ‘Bridge Of Sighs’ reached the Top 10 in the States. This collection of songs is in every budding guitarslinger’s reference library, and has Influenced a generation of musicians.

The success of Bridge of Sighs gave Robin the freedom to explore his musical limits. “In City Dreams” and “Caravan to Midnight” (both produced by Don Davis) demonstrated Robin’s maturing song writing abilities and strong connection to the Blues.

As punk and new wave attempted to redefine the musical landscape, Robin’s distinctive style of playing retained a sizeable live following in the United States. Radio, however was listening in another direction. In the late eighties, Trower’s recorded output became more sporadic. And in 1984 he split from long-time label Chrysalis Records.

In the Nineties, a brief reunion with Procol Harum gave Trower breathing space to reassess the direction of his solo career. He was now, he concluded, aiming to fulfill himself musically rather than sell tonnage. ‘For the past ten years I’ve just been making albums for my own heart,’ he recalled to this author in 2001. ‘The great joy of having my own label (V12 Records, owned jointly with manager Derek Sutton) is that you haven’t got to make music to please some guy behind a desk. You can please yourself and make the music you want’…

The first V12 album ‘20th Century Blues’ appeared in 1994 and saw him backed by drummer Mayuyu and bass player/vocalist Livingston Brown. As the decade progressed, Robin decided to take on a share of the lead vocals. ‘I thought to myself there aren’t any blues artists that aren’t singers…I thought I’d give it a go. When you write songs, you’re always gonna get a twist put onto them by whoever sings them. When you sing it yourself it tends to come out how you heard it in your head when you wrote it.’

With his stock still high among his fellow performers thanks to albums like 1997’s ‘Someday Blues’, the late Nineties saw him hooking up with Roxy Music’s Bryan Ferry for two albums, ‘Taxi’ and ‘Mamouna’, plus a European tour. It was a rare chance for European fans to see him live as, at this point, he was still concentrating on gigging in the States.

2000’s ‘Go My Way’ saw Trower sharing the spotlight with bassist/vocalist Richard Watts. As Robin later explained, ‘Go My Way’ was an album he rated highly. ‘It’s really where I live, that kind of blues; slightly spacey…I just like it. I like some of the other areas as well, but that’s my hometown.’

In 2002 Robin ran into Davey Pattison at Jimmy Dewar’s funeral. The chance meeting led to ‘Living Out Of Time’, released in 2003. It also featured Dave Bronze on bass and Pete Thompson on drums, a rhythm section he’d worked with many years earlier. So this was ’back to the future’…but with a difference. Young blues guitarist Eric Gales had supported Robin on a previous American tour and so impressed Trower that he wrote some songs for him. Robin and Eric never did have the chance to collaborate on recording them, but those songs formed the basis for “Living out of Time”.

2005 brought ‘Another Day’s Blues’, After this, Robin and legendary Scots rocker Jack Bruce got together to discuss remixing two of their Eighties collaborations for future reissue, but soon realized it would be more interesting to make it a hat-trick by recording a new album. The first meeting took place in February 2006. Robin and Jack’s joint venture, ‘Seven Moons’ was revealed to the public almost two years later.

Recorded in trio format with drummer Gary Husband, the result combined their talents more satisfactorily than its predecessors. ‘The main thing that changed,’ Trower confirmed, ‘is that we co-wrote all the music on this record. Before, we each brought our own songs, but now I write the lyrics and Jack and I do the music together; I think it’s a much better gel.’ He still regards Bruce as ‘one of my heroes from the Sixties.’ ‘By adding what he does, he makes the song into something much, much larger. All those dimensions are added compositionally just by him playing bass and putting the vocal melody to it.’

The next two albums were 2009’s ‘What Lies Beneath’, and 2010’s ‘The Playful Heart’. Both proof that Robin Trower still has the wherewithal to rock the world. Livingston Brown had heavy input into both records, and the latter disc – recorded with the road band of bassist Glenn Letsch, Pete Thompson and Davey Pattison – was particularly satisfying. The vibe is more contemplative than the power-rock of his early years, still the quality and passion is present in every single note.

The 2012 set “Roots and Branches” is a revelation, a mix of covers – the roots – and new material – the branches. The entire set is tribute to an artist still growing in power and dexterity, but most of all in emotional expressiveness. The CD garnered praise from both sides of the Atlantic as the many rave reviews attest.

Something’s About To Change released in early 2015 confirmed a world-class musician at the top of his game. With his own V12 record label allowing Trower to bypass the spirit-sapping protocol of the conventional record industry, it comes to no surprise this album sounds so vital. While palpably influenced by Trower’s deep love of post-war U.S. blues, its personal themes and visceral music mean that it will resonate with every generation. This set of songs differed from the catalog as Robin himself played the Bass on them. “As a songwriter and a performer, you use everything at your disposal to put into your songs,” reflects Trower.

The latest release is titled Where You Are Going To. The new CD is more of a rocker, but still squarely based in Robin’s love for Blues. Robin’s voice is much more confident on these ten new studio recordings, and the guitar work is stunning. A continuation of Mr Trower’s creative upsurge. The songs remain the cornerstones. The artist’s astonishing fretwork may sometimes take top billing, but the all-original material of Where You Are Going To speaks of the gas in his creative tank. “There is some sort of feeling of emotional release,” he says, “when you play a note that rings out right.” Leading the line, of course, is Robin himself, playing bass again, alongside his unmistakable soul-in-fingers guitar parts. Chris Taggart played Drums, and Livingstone Brown co-produced and did the mixing/mastering

The current century has seen Robin wowing fans old and new on both sides of the Atlantic. The stadiums he filled in the Seventies may be a fond memory, but the upside is that audiences in clubs and theatres can witness the magic at closer quarters.

Robin will return to the stage in the US for a six week tour in Spring 2017. It will feature a trio, Robin’s favorite line-up, with Richard Watts on Bass and vocals, and Chris Taggart on drums.

Make no bones about it, Robin Trower is an axeman’s axeman. He’s been a Fender Stratocaster endorsee ever since Jethro Tull’s Martin Barre let him try one before a gig in the early Seventies, and now has his own signature model – an honor accorded to few. Robin Trower live is an experience not to be missed. Whether you play guitar, or just enjoy a brilliant soulful player, come out and see the show. You will walk away smiling. 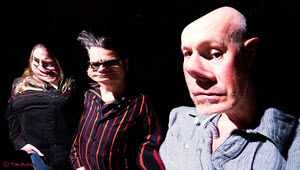 Tomorrow The Moon released their second album, “Blow, Mind, Blow” in late 2015, a menagerie of aggressive and psychedelic rock through which an unconscious yet unerring pop sensibility runs. The Chicago-based trio is fronted by guitarist/singer Steve Gerlach, who has worked over the years with John Cale, Tommy Keene and Chris Connelly to name a few. Gerlach also continues to work with the prominent Bowie tribute, Sons of the Silent Age (founded by Connelly and current Morrissey drummer Matt Walker) and multiple other projects, while always returning to the trio format of Tomorrow The Moon as a main course. “Blow, Mind, Blow” boasts two indeed mind-blowing computer-animated videos by Chicago artist Thomas McKeon.

Tomorrow the Moon link on  Spotify

MANY music videos can be found on Robin Trower’s Facebook Page Video tab.