Music is the inspiration and art is the appreciation.
Lunar Tide Music and Arts Festival is a celebration of not only the amazing music that inspires us, but of the art that surrounds us on a daily basis. In addition to some pretty stellar tunes, we have invited many talented Chicago street artists to setup live installments throughout the venue: showcasing their artwork. Featuring art by Brain Killer, Bunny XLV, Afrokilla, Tom Loranz and more! 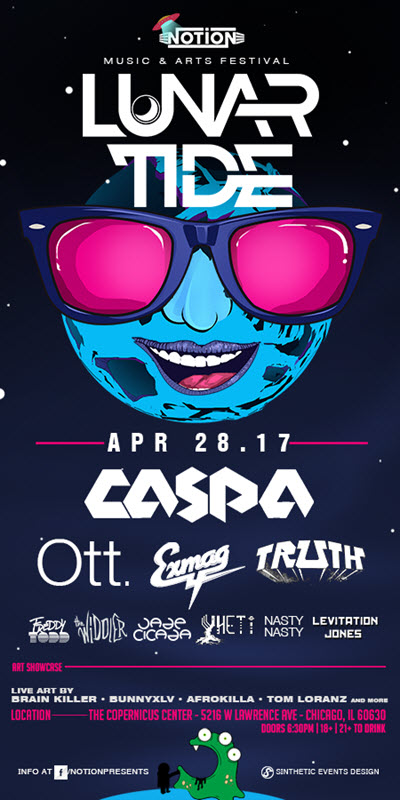 Caspa
UK bass pioneer, DJ, label owner, ex-pro basketball player, straight talking dubstep champion, dopest ghost: Caspa can be introduced in many ways. But the best is through his beats. His decade-deep discography has dented dances since dubstep’s earliest chapters. Over three studio albums, four mix compilations, 30+ singles and many high-profile remixes including Depeche Mode, The Prodigy, Deadmau5, Kaskade, Swedish House Mafia, Grand Puba, Ludacris, Miike Snow and TC, his precision heavyweight productions have been released on eminent labels such as Digital Soundboy and Tempa as well as his own influential imprints DubPolice and Subsoldiers. Both iconic dubstep brands that have played a major role in the worldwide dubstep phenomenon and boasted the earliest work of some of the scene’s most respected creative artists like L-Wiz, Subscape, The Others, Emalkay and Caspa’s partner in grime Rusko.

Ott.
The end of the 1980’s brought with it a cultural and musical revolution and Ott headed to London to immerse himself in the new energy. Initially unimpressed by the frantic, unmusical clatterings of acid house and “rave” he discovered a new wave of artists who apparently shared his love of organic dub and pristine electronics. Artists such as The Orb, Dub Syndicate, FSOL and African Head Charge. These were people who were unafraid to combine bass-heavy rhythm, abstract soundscape and timeless melody into a huge, ever-shifting sonic universe which reflected perfectly the spirit of hope and positivity which prevailed.

It was at this point that Ott found his first work as an engineer in several studios around North London. Working obsessively, 18 hours a day, seven days a week for the next ten years, Ott began developing the skills which would see him go on to work with many of those who created the sounds which inspired him in the first place – Brian Eno, The Orb, Youth, African Head Charge, Steve Hillage, and On-U-Sound.

After spending the 1990’s freelancing around London as a studio engineer and producer, Ott celebrated the end of the 20th century and the beginning of the 21st by giving it all up and moving to a remote cottage in South West England to be alone with his cats and his studio. With a vague plan to create the perfect soundtrack to an outdoor English festival he embarked on a series of sonic experiments, drawing heavily on the classic dub sounds from Jamaica and hypnotic electronic pulse from Germany which had provided such a refuge during the 1980’s. A period of intense creativity followed, during which a great many tracks were created and then stashed away on tapes, seemingly never to see the light of day.

Exmag
WORD IS BORN. WITH PLANET EARTH IN A STATE OF GREAT CHAOS AND TURMOIL, A FORCE OF EXTRAORDINARY MAGNITUDE FROM ACROSS THE MULTIVERSE HAS COME TO ASSIST. AS WE APPROACH THE GREAT INEVITABILITY, EXMAG BRINGS THE SOULFUL SOUNDS OF THE FUTURE TO AID IN YOUR JOURNEY. PEACE TO ALL WORLDS! Members Include Eric Mendelson, Tyler Dondero aka SuperNicer and Mike Iannatto.

Truth
Sonic architects of songs with an emotional heft as heavy as the subwoofer rupturing basslines that underpin their work, Truth are one of New Zealand’s finest creative exports. Respected across the globe, since inception several years ago, Truth (Andre Fernandez and Tristan Roake) have, as both world-class producers and party-rocking DJs, cut a clear pathway through the international dubstep scene.

On the nightclub and festival circuits, the fruits of their labor have included, several European tours, countless shows across the USA, New Zealand and Australia, a massive South American tour, and shows in Asia. Truth has built this performance presence through DJ support from Mala, Skream, Youngsta, Hatcha and N-Type, to name a few, giving their music an advance presence at key club nights like DMZ in London, Club Love in New York and through seminal radio stations such as BBC Radio One, Kiss Fm and Rinse FM.

Freddy Todd
Freddy Todd is truly a master of his craft not only in the studio but on stages across the globe. Without any pre-recorded sets, Freddy has the skills and the audacity to perform on the fly mixes of 100% original material tailored to his specific audience, mood, and venue each night, be it a theater in northern California, a club in the back alleys of Detroit, or an outdoor festival in the bush off the eastern coast of Australia (occasionally on special nights with his live drummer forming the FT Live Band/Duo). His earth shattering, meticulously programmed beats & rhythms, his lazer crunk, funky psychedelic bass & sound design, and his brain tingling, intelligently soul-soaked synths, melodies, & field-recorded samples are sure to shake your consciousness as they blast through airwaves out of top notch sound systems across the universe while Freddy serenades you with 100% live & improvised get-your-booty-on-the-floor analog Moog synthesizers & keytar, loop triggering, and occasional drums & percussive elements. Be careful where you don’t look.

The Widdler
Born in Tel Aviv and living in Austin, TX, The Widdler has been playing and producing music since he was 10. Renowned in the American dubstep scene since his inception, the Widdler releases such as Sensei Samurai , Froggy Style, and Lady Dub are regarded as classics in the bass genre. Supported by artists like Bassnectar, Mary Anne Hobbes, Excision, Bukez Finezt, and 6Blocc, member of US imprints Dank ‘N’ Dirty Dubz, and MalLabel Music, represented by Circle Talent Agency, and most recently signed to Owsla Records, The Widdler is widely recognized as an innovator and originator of dub sound. Constantly practicing, The Widdler incorporates mix sessions into his daily routine, which translates to his flawless performances at shows; headlining with the likes of Doctor P, Reso, Ajappai, and Tipper throughout the world. Currently spending his time between gigs in the studio, The Widdler is working hard to bring the freshest tunes to his fans, with his newest releases to drop in 2013. Taking influence from various genres of music and lifestyle, his tunes comes in all shapes and colors. From the chilled reggae dubs and blue mood atmospheres to the mean menacing throbs of bass and percussion, The Widdler knows how to weave his musical roots with his production that makes each set entirely special. Sit back, light a spliff, and enjoy the sounds of The Widdler

Jade Cicada
Jade is a material thought by the ancient Chinese to be crystallized moonlight that has fallen to earth to spread wisdom and peace. Cicadas symbolize rebirth, metamorphosis, and illumination, and with their dying breath sing with such power that their chorus of song is among the loudest in nature. Jade Cicada’s music is a reflection of these ideas, and a constant homage to those who have inspired him.

Yheti
Yheti’s live performances are an ever morphing detailed sound sculpture that plays with the souls of those open to the more experimental, surreal, low end heavy side of electronic music. With the intention of creating a champion dance environment through high energy bass, deep rhythms, and soul driven melodies.

NastyNasty
NastyNasty remains a unique force in the electronic music scene, toeing the line between dubstep and holy shit this is off to a boring start already. I hate writing these but I appreciate you booking me and I recognize the need for a paragraph or 2 about an artist you’ve got coming to your town so here goes. I started using the name NastyNasty in late 2008 as a moniker for my bass oriented experiments in beats. Previously I had been making breakcore and idm type stuff under another moniker but I really wanted to dig deeper into synthesis and rely less on chopped up amen breaks. I had some friends Invite me to join a little known crew at the time called Frite Nite that harbored the likes of a bunch of badasses such as EPROM and Salva. Blogs like Xlr8r and Fader caught wind of the things I was doing and posted really nice things about me, spreading my own brand of sentimental bass around the globe. I toured around a bunch, got to go to europe a few times…it all felt super surreal to a young man who just wanted to make weird noises on his laptop. In 2011 I released a mix of originals called Lazerbrain and an e.p. on Rwina called Poison Flavored, shifting my sound from the emotionally distressed towards the mentally disturbed. I’m pretty sure my story was supposed to end in the great dubstep implosion of 2012 but I’m a tenacious son of a bitch and I wouldn’t be writing this shit if the story ended there. Flash forward it’s now 2016 and I’m writing still writing music on my computer all night then finding time to re-write my bio at 6 am. Over the years I’ve released music on Frite Nite, Rwina, Saturate, Mau5trap(yes actually), Planet-Mu, STYLSS and many more. Fancy places either my name or music (or both) have been include SPIN magazine, the Fader, Xlr8r and CSI:Miami. I have a really cool e.p. called Broken Moon coming out on Saturate records that’s like a marriage of my youthful punk spirit and the ancient synthesizer wizard I’m growing into. It’s already got support from a bunch of freakin’ badasses such as Noisia, G Jones, The Gaslamp Killer, Zeke Beats, Dj Craze and Bleep Bloop…shit I didn’t even send it to some of those names so it wasn’t even like a homie thing!

Levitation Jones
Hailing from a small town in Rhode Island where top 40 is the norm; Levitation Jones, Brian Gardner, steps up to the plate with quite a surprising, rule bending, curve ball approach, stretching the spectrum of bass physics. This quickly rising producer blends his original productions with heavy influences of dubstep and future bass paired with a seemingly effortless style of live mixing, pulling his audience in for a trip to the depths of the strange and the weird.
With recent performances on the revered Camp Bisco, Big Dub Festival, Creatures of the Night Festival, F.A.R.M Fest and more along with 40+ club shows across the U.S just last year, it’s no question Levitation Jones is making major waves in the bass music industry, earning him a loyal following. Levitation Jones has shared the stage with Minnesota, G Jones, Space Jesus, The Widdler, Thriftworks, Kaminanda, Yheti, and many more.
Festival Facebook Page