The piece of art – with dimensions of 120 x 15 meters – was created to honor the National Exhibition in Lviv in 1894, which was also the celebration of the patriotic centennial anniversary of the victory of Polish troops over Russians in the Battle of Raclawice.

This great undertaking was the idea of Jan Styka (1858- 1925). After receiving the approval of the authorities in Lviv in 1982, Styka invited Wojciech Kossak and seven other Polish painters to join in and create the Panorama of Raclawice. 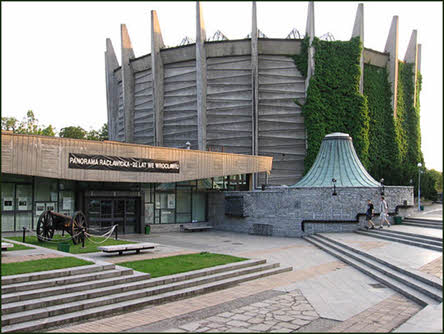 In the period leading up to Juty 1893, in Stryjenski Park, a rotunda – like shaped building was erected. Inside the construction, hung an iron scaf­folding, which was built in Vienna and designed specifically to hold up this great painting. The can­vas was woven in fourteen sections, with a total area of 1800 square meters – it was imported from Brussels.

The intensive work of creating the Panorama of Raclawice lasted nine months and the presentation ceremony took place on June 5, 1894. Since the first day, the paining became very pop­ular, not only to the public, but art communities
throughout the world – gaining admiration and widespread fame.

History of the Panorama of Raclawice

In 1944, during the bombings of Lviv- the painting sustained some damage. Fearing further devastation after the invasion of the Soviet troops, the canvas was rolled up, put away in chests, and hidden away in a Bernardine monastery.

As a result of the war, Lviv became part of the Soviet Union. The Polish authorities initiated an attempt to regain possession of the Panorama. This was completed in 1946, when the Panorama was transported to Wroclaw.

Over the next 30 years, however, it remained in storage due to its anti Russian nature and financial problems regarding the construction of a suitable object for exhibition. After many unrealized plans, it was not until 1980 that work resumed with the complex and painstaking restoration of the canvas as well as the creation of perfect conditions for the installation and showing of the Panorama.

The ceremonial opening that included a public presentation of the Panorama took place on June 14, 1985. Even these days, the Panorama of Radawice invariably arouses great interest. By the end of 2014, it was viewed by seven million people.

Jan Styka is also the author of panorama ,Golghota” (dimensions of 60 x 15 meters), shown since 1951 in Forest Lawn Memorial Park, in Glendale near Los Angeles.

The Copernicus Foundation is proud to provide underwriting through the use of the Copernicus Center facilities for this event.
Public Service Announcement