The pride of Pakistan, Comedy King Omer Sharif will be performing live in Chicago along with six famous Artists from Pakistan. This live family comedy  event is appropriate for all ages. 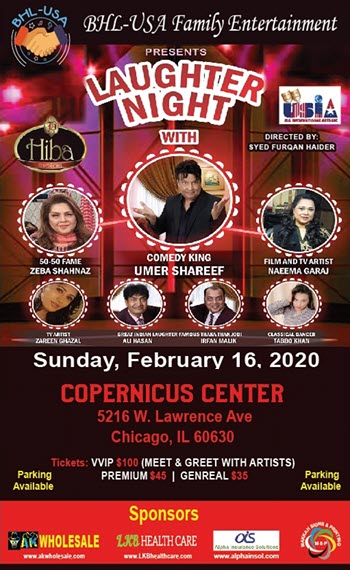 →  Intermission will be 30 to 45 Minutes (Food & Beverages Available)

→  VIP ticket holders will have access to a private Meet & Greet with the performers during intermission or after the show.(announcement will be made)

” SIR Umer Sharif, is a Pakistani stand-up comedian and Actor, Director, Producer, Writer, Composer, Author, Poet and television personality. He has been regarded one the most successful comedians in the subcontinent. He was rated as best comedian ever even by Indian audiences. Indian comedy kings Johnny Lever and Raju Srivastava have called him ” The God Of Asian Comedy ” on the Indian comedy show “Comedy Circus”. He has received National awards for Best Director,Best Actor in 1992 for Mr. 420. He has received ten Nigar Awards, he is the only one to receive four Nigar Awards in a single year. Also three Graduate Awards and four national awards. He has also awarded with Tamgha-e-Imtiaz.  ”   (quoted from Harkat Films)

• Brought to you in Chicago by BHL-USA, Inc.  [An Illinois based consulting, lobbying, marketing, technology and event management firm]