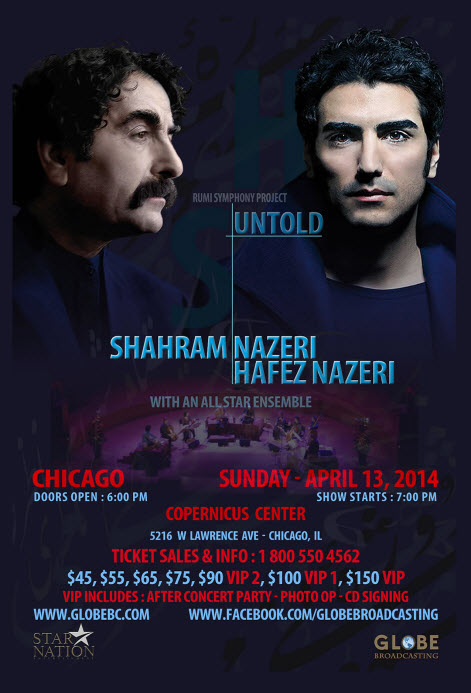 The internationally acclaimed Rumi Symphony Project is the innovative creation of composer, multi-instrumentalist and vocalist, Hafez Nazeri, featuring his legendary father, Shahram Nazeri, accompanied by an all star ensemble. Rumi Symphony’s 2014 world tour celebrates their accompanying release of one of the most anticipated albums of the year from Sony Classical worldwide, “Untold”.

This groundbreaking project which has sold out many of the most prestigious concert halls worldwide aspires to cross cultural boundaries by integrating Western and Eastern classical music into a new and universal harmony with hopes to bring cultures and generations together through the messages of love and unity interwoven throughout verses of the great poet and philosopher Rumi.

The highlights of this event include a long-anticipated performance by the legendary Shahram Nazeri, dubbed the “Pavarotti of Iran” by the New York Times, and the winner of the Chevalier Medal by the French Government, along with his son, Iran’s most influential young composer and one of the most innovative musicians of our time, Hafez Nazeri.

These revolutionaries of the music world will be accompanied by an eclectic ensemble selected from some of the most renowned performers of the East and West.

The Copernicus Center is proud to host Persian Events in Chicago.