“He has taken the Irish music scene by storm. Now it’s time we shared him with the rest of the world.” – Daniel O’Donnell 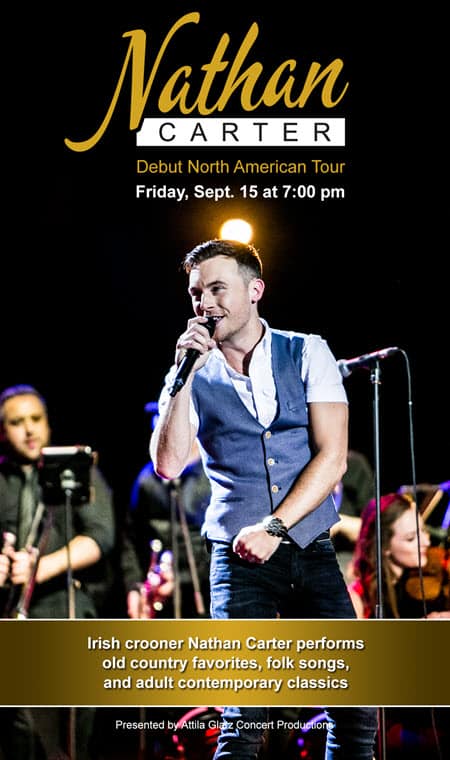 Irish singer Nathan Carter has catapulted into stardom, charming audiences on guitar, piano, and accordion. He sprang into the limelight with his cover of Bob Dylan’s “Wagon Wheel,” and now at age 26, he boasts three number-one albums, two number-one singles, and two number-one live performance DVDs. On his debut North American tour, join Nathan and his Irish band as well as special guest star Chloë Agnew, formerly of Celtic Woman, for a show-stopping mix of songs like “Bridge Over Troubled Water,” “Home to Donegal,” and a program packed with old country favorites, Irish folk songs and adult contemporary classics. His debonair style and soft-spoken humor are entertaining and his lively concerts are inspiring a new generation of audiences to jump and jive. Fans of Daniel O’Donnell, Michael Bublé, and Tony Bennett will love this young Irish crooner who is blazing a trail to worldwide success. Don’t miss him in his upcoming PBS special released this June (check local listings).

After growing up in a household filled with both Ireland’s Celtic sounds and country western music, Nathan started performing at a young age, picking up the accordion, piano, and guitar, in addition to singing. He gained success in Ireland playing in smaller venues, and had his big break when his cover of Bob Dylan’s “Wagon Wheel” went to number one on the Irish charts.

His next two albums also hit the number one spot on the Irish Album Chart, and Nathan signed with Decca Records. His first album with a major label, Beautiful Life, went four times platinum in Ireland, and became the first of his albums to chart on the UK Albums Chart. His next and most recent album, Stayin’ Up All Night, also rose to number one in Ireland, and he has spent much of 2016 touring the country supporting it.

Nathan Carter is now credited with sparking the rebirth of country music in Ireland, introducing a new generation of fans of all ages to the genre. With fans the world over, he will be embarking on his first North American tour by popular demand in September 2017.