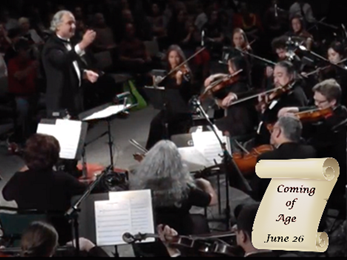 The Lincolnwood Chamber Orchestra (LCO) returns to the Copernicus Center for an intimate string orchestra concert in the Annex featuring the music of Chicago’s communities–in a program for all ages.

This June 26 concert celebrates diversity and a return to live music! It also coincides with the 50th Anniversary year of the Copernicus Foundation.

Following the concert there will be a meet and greet with the performers from 8 to 8:30pm.

About the Lincolnwood Chamber Orchestra:

A cultural fixture on Chicago’s northside, the LCO is a professional ensemble performing for over 30 years. Highlights of their past programming at Copernicus Center include the 2016 Sir Georg Solti Memorial Festival (with members of the Chicago Symphony), two Christmas Spectaculars with the Chicago Chopin Society, and performances at Taste of Polonia (exploring Polish music and culture) and on the Chicago Summer Silent Film Festival. The orchestra has appeared at a wide variety of venues, including the Harris Theatre, North Shore Center for the Performing Arts, and the Chicago Cultural Center.  Follow the LCO on Facebook. 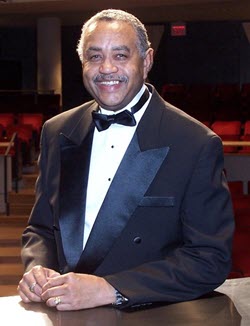 Van Gilmer has had a distinguished musical career as a conductor, composer, and vocalist–particularly in the field of gospel music. In 1992 he was appointed director of the Bahá’í World Congress Gospel Choir and for sixteen years directed the Bahá’í Gospel Singers. Currently he is Music Director at the Bahá’í House of Worship in Wilmette, Illinois, where he created the annual “May Choral Festival” attracting hundreds of international singers.

Van’s rich and soulful tenor voice has been heard in concerts around the world. He has recorded with the Voices of Bahá in Carnegie Hall, the Maly Moscow Symphony, Slovak Radio Symphony, Warsaw Philharmonic, Czech National Symphony, and the Budapest Symphony. In 2001 he was awarded the Gold Prize at the Johannes Brahms International Choral Festival in Germany. His song My God, My Adored One was awarded Best Gospel Song by the Independent Music Awards in 2006. Van is widely in demand as a music educator, often called upon at schools and conferences to lecture on the history and practice of gospel music, and to train singers of all races and backgrounds in this universally beloved style of music.

Van has a unique ability to bring people together to engage in a dialogue that moves communities forward. In 2020 he created the monthly video conference “Intimate Dialog on RACE Preceded by Prayer,” challenging our assumptions about each other and inviting open communication between us all. 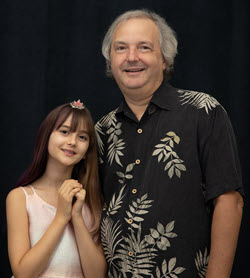 Ten-year-old Penelope Lo’ihi enjoys singing, dancing, acting, and modeling. She is a 4th grader at Hanahau’oli School, and studies ballet at Hawaii State Ballet and has participated in summer programs at Honolulu Theater for Youth and Diamond Head Theatre. She has recorded at Rendez-Vous Studio, sang and danced with the Lincolnwood Chamber Orchestra in Chicago, appeared in TV commercials, and has her own Youtube channel. She performs with her father, Philip in Penelope and the Day, singing Disney classics, popular standards, Hawaiian music, children’s songs, and more.

Philip Simmons is Founder and Music Director of the Lincolnwood Chamber Orchestra, Resident Conductor of the Orchestra of the Hawaiian Islands, and Artistic Director of American Music Festivals. He has conducted in twenty-one countries, performing in Carnegie Hall, Chicago Symphony Center, the Musikverein, and the Great Halls of the Tchaikovsky Conservatory and Saint Petersburg Philharmonia. In Chicago he was previously Music Director of the Lake Shore Symphony of Chicago (in residence at the Copernicus Center) and Orchestra Director at Northeastern Illinois University. Mr. Simmons graduated from De Paul University with degrees in music composition and his most recent works include “Soul of America” and “Koa Suite.” He is also a classical guitarist and has appeared as soloist with every orchestra under his direction.

About the presenter – American Music Festivals:

American Music Festivals is a not-for-profit organization that presents concerts promoting cultural exchange and preserving orchestral heritage. Through collaborative programming it reaches out to diverse communities, bringing people together to enjoy classical music, allowing them a better appreciation of its place in their lives and the humanities.

◊ → This event is a Theater Rental underwritten by the Copernicus Foundation