Kadim Al Sahir is a legend in the 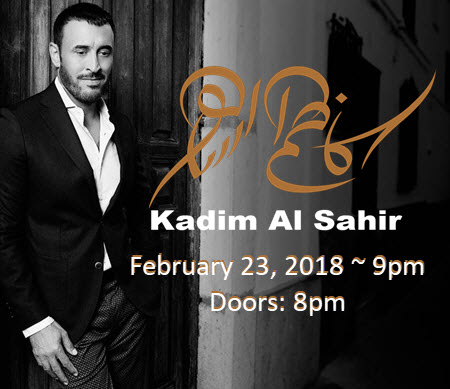 Arabic world of Arts and music. He has sold over 100 million albums and performed live to millions across the globe throughout his 30 year career. This true pan Arab international, multi talented, and multi award winning artist continues to romance the world with his music.

Kadim has been presented with numerous artistic awards including the BBC Radio 3 World Music Award for “Best Middle Eastern/North African Artisit.” Jordan Awards for “Best Arabic Audience, “ and Murex d’or for “Lifetime Achievement Legend Award.” His song “Ana Wa Leila” is the only Arabic song listed and ranks 6 th among the ten best songs in the world on BBC.

Born an Iraq in 1957 to a simple family, Kadim grew fueled by passion for creativity. He soon became a multi –instrumentalist and started composing his own music. He popularized Iraqi song and music during very challenging times of war with songs hits like “Ubart il Shat, “Salamtak bi Dalak” &amp; “Baghdad Kathora Al Hadeeth.”

Kadim pioneered Arabic-International collaborations with various artists including Sarah Brightman on “The War is Over,” Lenny Kravitz on “We want Peace,” Paula Cole on “One Giant Leap,” TGU &amp; Quincy Jones &amp; RedONE on “Tomorrow.”

Kadim is the only true Pan-Arab artisit with an unmatched popularity with all Arabic people. This love and poularity has only grown by his recent position as a coach on the Arabic version of the International hit series “The Voice,” produced by Sony TV and broadcasted by MBC with over 100 million viewers world- wide. His best is yet to come as he adapts the “Epic of Gilgamesh” his labor of love for over 15 years into an Opera. It’s his Mona Lisa, the master piece of his life, to which he is accredited for as the most ambitious and anticipated work of art in the history of Arabic music.

As for all of his accomplishments and praise through-out his career he still remains and strives to be a genuine humanitarian. He is recognized by the Arab League with the “First Class Accolades Honor.” He is recognized by UNICEF as a “Goodwill Ambassador.” As a humanitarian he uses his music to spread love and peacefulness across the universe.