John Paul II and the Fall of Communism

World premiere of Liberating a Continent

Admission is FREE:  Guests will be admitted on first-come, first-served basis 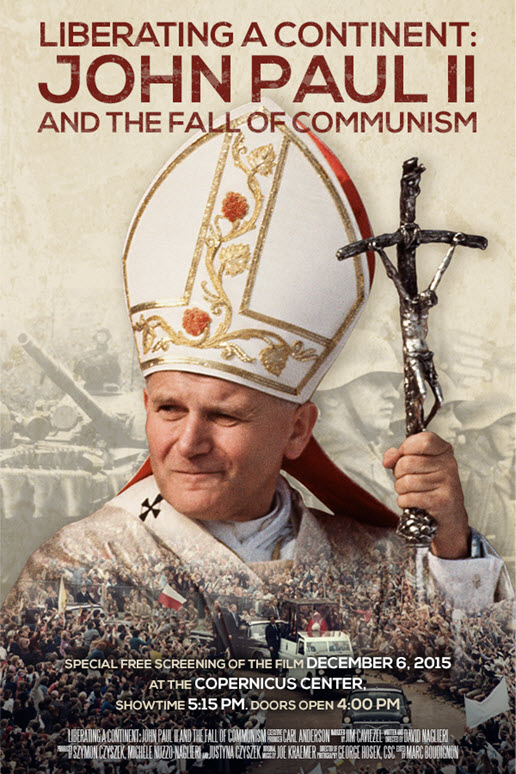 On Dec. 6, Liberating a Continent: John Paul II and the Fall of Communism will make its global debut at the Copernicus Center in Chicago.

What is the true inside story of the fall of communism? How do the spiritual forces unleashed by Pope John Paul II in his native Poland continue to resonate today in places like Ukraine? For the first time the complete story of the Revolution of ’89 and the ongoing quest for freedom in Europe is unveiled in Liberating a Continent: John Paul II and the Fall of Communism.

The 90-minute film chronicles Karol Wojtyla’s remarkable rise from an underground seminarian and amateur playwright to the Cardinal Archbishop of Kraków and brings to light how Wojtyła’s ascension to the papacy in 1978 struck fear in the heart of the Soviet politburo. As archbishop, Wojtyła developed tools for resistance to communist rule that were grounded in defense of human rights and the reclaiming of Poland’s Catholic identity. Historians and journalists, with access to recently declassified KGB documents, help to illustrate the vast Soviet campaign to counteract John Paul II’s moral crusade. The documentary, in methodical fashion, follows the wave of free thought that swept through the Soviet bloc as a result of the pope’s epic nine-day pilgrimage to Poland in June 1979.