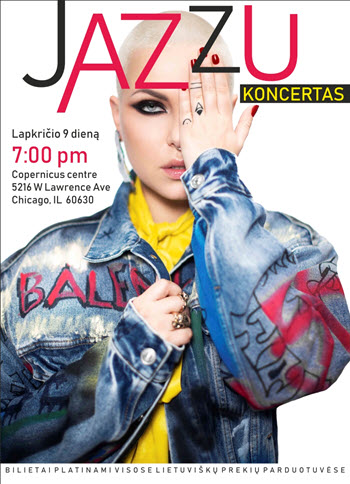 At age 15-16, she became a member of the group called ‘Milky Lasers’. They released two albums called ‘Voyage’ and ‘Kitchen’ (published by phazz-a-delics). In 2005 Juste met producer Leon Somov and a new collaboration was born. That’s how she got involved into electronic music and started to create and sing this kind of music. Later on, Juste and Leonas left Lithuania and moved to London (where Juste studied jazz vocals).

Leon Somov & Jazzu performed many live concerts. Two great musicians joined them (Marijus Aleksa – on drums & Domas Aleksa – on bass). The team toured in Lithuania, UK, Germany… Leon Somov and Jazzu worked on many albums together.  The duo ended their professional coupling in 2018.

Jazzu also collaborated with two great artists, Lithuanian producer Mario Basanov and Lithuanian dance music aficionado DJ Vidis. They released a track and video called ‘I’ll be gone.’ It became the most popular hit of the year and the most-watched Lithuanian clip on YouTube ever! Following this release, the team decided to record another track called ‘Who’s shot the silence’, which was released in 2014.

This live Jazzu concert in Chicago will bring a full band experience including old and new songs!